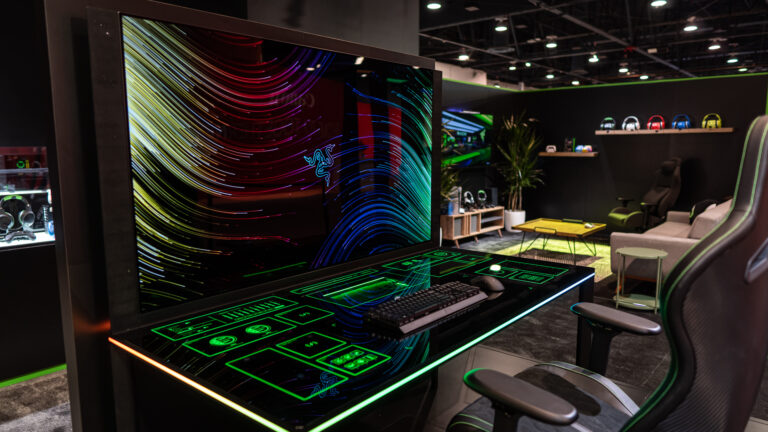 At this year’s Consumer Electronics Show, Razer unveiled some unique and revolutionary technology. In collaboration with Fossil, the gaming peripherals behemoth has debuted a limited-edition wristwatch.  Razer has just announced its most ambitious endeavor yet: the world’s first customizable gaming desk PC. Take a look at the information provided below.

Razer has announced Project Sophia, a completely modular gaming desk idea allowing future gamers to design a personalized desk configuration. The main goal is to provide consumers with a modular desk that can hold up to 13 different modules that can be magnetically linked to the desk. Because this is a Razer product, the modular desk will have a strip of Razer Chroma-supported RGB LED wrapped around the borders.

A THX Surround Sound control panel, a system monitoring unit, a programmable hotkey module, a network performance module, a 15W wireless charger module, a media controls module, a Thunderbolt 4 hub, and many other modules are among the interchangeable modules. On the workstation, there is also a dedicated slot for a 65-inch or 77-inch OLED display.

As a result, customers may utilize one of the aforementioned modules to build a personalized desk arrangement by magnetically attaching it to the Project Sophia gaming workstation. It acts similarly to a physical control hub, allowing users to monitor and control numerous processes on the move.

When it comes to the Project Sophia desk PC’s power source, Razer has used a bespoke PCB with Intel and Nvidia core components.  To support the different modules and give high-end performance, the desk is equipped with an Intel CPU and an Nvidia GPU. Internal components are placed in a compact chassis beneath the glass tabletop that can be readily updated.

The modular desk will also come with an improved version of Razer’s existing Enki Pro gaming chair. The new Enki Pro is equipped with the company’s HyperSense haptic technology, which can provide appropriate haptic input based on various gameplay circumstances.

The haptic mechanism for the gaming chair was developed in collaboration with D-Box, and native support for over 2,200 titles has been included.

The HyperSense haptic device has 65,000 variations, +/-1 G-Force tactile feedback, and can tilt 1.5 inches backward to provide a realistic gaming experience. The Enki Pro’s HyperSense technology, according to the makers, has a 5ms reaction rate.

When it comes to the Project Sophia setup’s pricing and availability, Razer has yet to announce the modular desk’s release date.  The Razer Enki Pro with HyperSense technology may, however, find its way to the commercial market in the next months, though no price information is available at this moment.