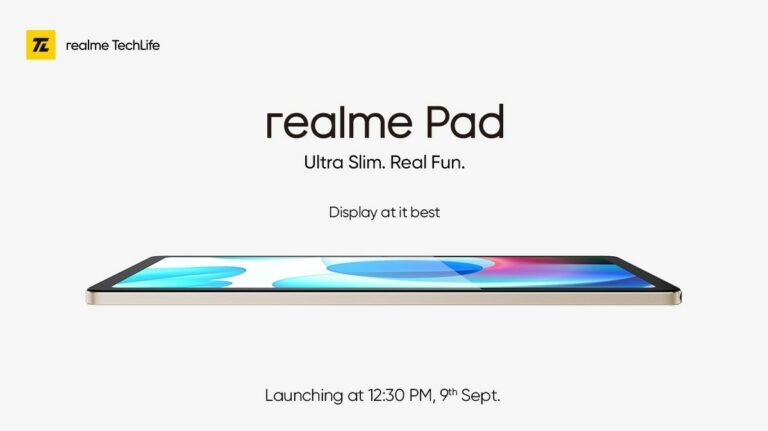 The Realme Pad is slated to launch alongside Realme 8s 5G and Realme 8i in India on September 9. The company created a dedicated microsite on its website as well as on Flipkart announcing the tablet’s availability.

The Realme Pad’s product teaser page originally revealed that it will be ultra-thin, with a thickness of only 6.9mm. Realme has now updated the Flipkart product description, outlining a few relevant information about the display on the Realme Pad. The page also discloses the Realme Pad’s few specs, alongside the tablet’s front and back design highlights. The Realme Pad appears to have two cameras sensors, one in the front and one in the rear.

Furthermore, the product microsite indicates that Realme Pad will sports a 10.4-inch WUXGA+ display. The WUXGA acronym stands for widescreen ultra extended graphics array, and the tablet has a screen resolution of 2000 × 1200 pixels.

The renders posted on the Flipkart listing depict thin bezels on all sides of the tablet with an 82.5 percent screen-to-body ratio. The front camera sensor is positioned on the top bezel. The Realme Pad has a single 8MP camera arrangement on the back, with a fine line running through the panel corresponding to the wider side. The Realme Pad is portrayed with a Gold finish, although previous leaks indicate that the tablet may also be available in Grey. The Realme branding is engraved in the bottom corner of the back panel.

Besides the aforementioned details, Realme hasn’t revealed anything regarding the internal specifications. According to recent speculations, the handset will be equipped with an octa-core MediaTek Helio G80 processor with a built-in Mali G52 MC2 GPU. It’ll most likely come with 4GB RAM and 64GB of internal storage, with microSD card expansion up to 512GB. It’s also rumoured to include a massive 7,100mAh BLT001 battery with a 30W  SuperDart fast charging.

The Realme Pad launch event will commence on September 9 at 12:30 pm. It will be streamed live on Realme’s social media handles for everybody to watch. A teaser image on Twitter illustrates the speaker grille and USB connector on the bottom edge. It appears to have rounded corners as well as a 3.5mm analogue headphone jack. In terms of pricing, based on confirmed specs, leaks, and speculations, we believe the Realme Pad will be priced at around Rs 25,000 in India and is likely to be sold exclusively via Flipkart and other Realme channels.