The University of Michigan has a team working on new batteries, who now developed a  “new biologically inspired battery membrane”. These batteries are made using recycles Kevlar fibers that ould quintuple electric vehicle range. The team is led by Professor Nicholas Kotov in the Michigan research facility, Ann Arbor. 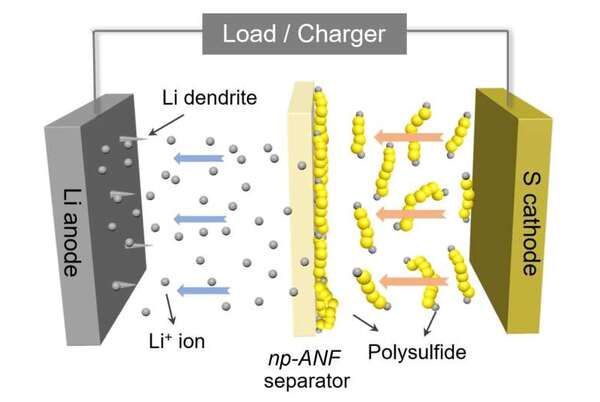 The Ann Arbor, Michigan research facility is one of the best in the world, and Kotov, whose research focuses on the development of biomimetic nanocomposites. Other things they are focused on are, the self-assembly of nanoparticles, and chiral nanostructures, which have worked to change the narrative on lithium-sulfur cells. Kotov said in a press release from the University, “There are a number of reports claiming several hundred cycles for lithium-sulfur batteries, but it is achieved at the expense of other parameters—capacity, charging rate, resilience, and safety. The challenge nowadays is to make a battery that increases the cycling rate from the former 10 cycles to hundreds of cycles and satisfies multiple other requirements including cost.”

Compared to standard lithium-ion batteries, lithium-sulfur batteries give five times more capacity. However, the issue is that the lifespan of the batteries was reduced. Not making it an effective option for using them in vehicles. The reason for the shorter life span is dendrites, the appendages designed in a way to receive communication from other cells. Such Dendrites can pierce through the cells and reduce the life span of the cells, and the lifespan of the batteries.

In addition to this, there are other challenges like the polysulfide can flow in between lithium. Such bonds can cause leakages or blockages. Stated, “The membrane is needed to allow lithium ions to flow from the lithium to the sulfur and back—and to block the lithium and sulfur particles, known as lithium polysulfides.”

However, Kevlar, the same material used in bulletproof vests, can stop dendrites from penetrating the membrane using dense aramid fibers found in the material. The cells that Kotov and his team developed use recycled Kevlar fibers. The Kevlar “can enable lithium-sulfur batteries to overcome their Achilles heel of cycle life,” caused by the two previously mentioned reactions between molecules.

Kotov further stated, “Achieving record levels for multiple parameters for multiple materials properties is what is needed now for car batteries,” Saying that the lithium batteries could be nearly perfect. While using sulfur seems like an interesting option, automakers are working on reducing cobalt usage by using nickel or other materials. Due to the Sulphur’s instability and lower life span, it wasn’t used. But as the University of Michigan is working on the technology it could change how batteries are made. Also reduces the battery costs, as sulfur is available abundantly compare to cobalt.