Researchers Develop a ‘Third Thumb’ Reshapes the Perception Towards Prosthetics

Designer Dani Clode as a part of an award winning graduate project at the Royal College of Art developed a device called the ‘Third Thumb’. This device was designed to change the perception of people towards prosthetics. Later she was invited to be a part of Professor Tamar Makin’s team of neuroscientists at UCL. The researchers in this team were studying and investigating the phenomenon of how the brain can adapt to body augmentation.

The study led by the researchers at UCL found out that using the robotic Third Tumble can affect the way the hand is represented in the brain. The researchers trained a group of people to make use of this extra robotic thumb.

The study found out that these people could use the extra thumb to carry out a number of dexterous tasks such as building a tower made out of blacks with one hand by making use of two thumbs. The details about this study are published in the journal ‘Science Robotics’ where the researchers disclosed that the participants which made use of this thumb increasingly felt like it was a part of their body.

Professor Makin who is currently serving at the UCL Institute of Cognitive Neuroscience and also the lead author of the study said that, “Body augmentation is a growing field aimed at extending our physical abilities, yet we lack a clear understanding of how our brains can adapt to it.”

Adding further they said, “By studying people using Dani’s cleverly-designed Third Thumb, we sought to answer key questions around whether the human brain can support an extra body part, and how the technology might impact our brain.”

In this study a team of 20 participants were trained to make use of this thumb for a period of 5 days. They were encouraged to take this thumb home and make use of it while carrying out their daily activities, consisting of two to six hours of wear time daily.

These participants were then compared to another team of 10 control participants who wore the static version of this thumb during the same training.

Dani Clode said that, “Our study shows that people can quickly learn to control an augmentation device and use it for their benefit, without overthinking. We saw that while using the Third Thumb, people changed their natural hand movements, and they also reported that the robotic thumb felt like part of their own body.” 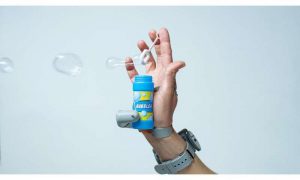 The ‘Third Thumb’ is made with 3D printing technology which makes it quite easy to customise. It is worn next to the pinky finger, on the opposite side of the actual thumb. Pressure sensors are attached to the wearer’s feet that enable them to control the thumb. The sensors are connected precisely on the underside of the big toes. Both the toes sensors are responsible for controlling different movements of the thumb.

Paulina Kieliba who is currently serving at the UCL Institute of Cognitive Neuroscience and is also the first author of this study, said, “Body augmentation could one day be valuable to society in numerous ways, such as enabling a surgeon to get by without an assistant, or a factory worker to work more efficiently.”