A lot of innovations that we see today were inspired by nature or functioning of the human body. To a large extent, science derives its inspiration from nature. It can be safe to say that nature is the best creator. Replication and Incorporation of nature like qualities in robots has always been challenging but such robots and technology once developed can go a long way.

Many robots that are developed to function in harsh environments got their designs inspired by the creatures found in that region. These creatures have evolved into a particular shape or have developed certain characteristics due to large amounts of exposure and evolution.

A team of researchers at ACS Applied Materials & Interfaces have successfully developed cilia in an artificial setting. These cilia can move in a wave like pattern when a rotating magnetic field is applied to it. This quality makes it an ideal candidate for climbing soft robots and microfluidic devices.

Cilia plays a vital role in the human body, it’s hair-like structure and rhythmic movements enable liquid around the cells to move and propel the cells themselves. Naturally, cilia is capable of flapping independently. However, if one wants to artificially recreate such movements it would require complex mechanisms.

Replication of small and whip like movements by cilia can be resourceful for researchers while creating better robots and microscopic devices. Previous attempts to recreate cilia artificially were futile as artificial cilia are expensive and needed sophisticated moving parts. And once they were completed, the size was too big to be used for micro scale devices. 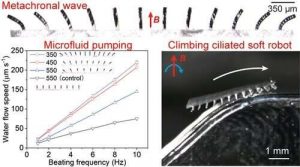 A team of researchers consisting of Shuaizhong Zhang, Jaap den Toonder and colleagues wanted to develop cilia that are micro-scale in size and is capable of moving in a wave when a magnetic field is applied, quickly pumping water over them or act as a soft robot that is capable of crawling and climbing.

In order to go ahead with this model, the researchers first infused a polymer with carbonyl iron powder particles then proceeded to pour the mixture into identical 50 μm-wide cylindrical holes.

As the polymer was getting cured, the researchers placed magnets underneath the molds. This slightly altered the particles alignment and magnetic properties in the adjacent cilia.

In order to test whether this artificial cilia is capable of moving in water and glycerol, the researchers applied a rotating magnetic field. As the magnets were moving around the array, the cilia whipped back and forth. The flow generated from this motion was much greater than most other artificial cilia.

The researchers flipped the arrangement over and it sprinted across the flat surface. It could achieve a maximum speed that was proportional to that of a human’s running speed. When the magnetic field flipped directions, the robot reversed.

The soft robot was able to crawl up and down on a 45 degree incline, climb vertical surfaces, walk upside down and also carry an object that was 10 times heavier than its own weight.

According to the researchers, since these artificial cilia are magnetically propelled and are not connected to any other device, they can therefore be used to produce microfluidic pumps and agile soft robots to be used for biomedical purposes.