Rather than trading cryptocurrencies, the wallets will allow Robinhood clients to directly possess and transfer bitcoin and other cryptocurrencies to pay for goods and services. Robinhood’s stock climbed 11% on Wednesday, bringing its market capitalization to $40 billion.

This month, Robinhood plans to start testing the wallets with a small group of consumers before expanding the service to its more than 32 million registered users. According to information uploaded on the Robinhood app, about 300,000 consumers signed up for the wallet wait-list within hours of the announcement.

In the second quarter of this year, cryptocurrency trading brought in $233 million, up from $5 million in the same quarter last year.

During the second quarter, around 60% of funded accounts on the platform exchanged cryptocurrencies of some kind, according to the broker. Trading in dogecoin, which started out as a joke and was championed by Elon Musk, accounted for 62% of cryptocurrency transaction revenue during that time period.

At the end of the year, the brokerage’s cryptocurrency assets under custody totaled $22.7 billion, up 29 times from the previous year. In a recent presentation to retail investors, Robinhood stated that bitcoin trading would be a key component of its international expansion. Users will also be able to make automated recurring cryptocurrency investments through the broker.

Regulators have questioned Robinhood’s streamlined and “gamified” user experience, which uses animations to encourage trading behavior and allows users to buy and sell stocks and cryptocurrencies in seconds.

Customers of Robinhood received a push notification with a “high-five” emoji announcing the wallet launch. The brokerage also tweeted a link to a video clip from the comedy Seinfeld, in which George Costanza produces an overflowing leather wallet from his back pocket, with Robinhood co-founder Vlad Tenev’s visage superimposed on the character’s face. 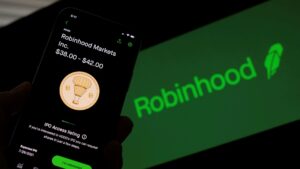 “We’re not first to the market — we’ve been taking our time to make sure that we build this in a phased approach,” Robinhood chief product officer Aparna Chennapragada told CNBC. “We’ll have a few customers come in, iterate on the product, get the customer feedback and then expand from there”.

Identity verification, multifactor authentication, and email and phone verification will all be included in the crypto wallets, according to Robinhood, to keep funds safe from hackers.

Also read: Nayib Bukele says El Salvador will spend $4 million worth of its bitcoin on a pet hospital