Artificial Intelligence (AI) is being developed at a very fast pace due to the advancement in science and technology. This technology is considered to be groundbreaking on various levels. With the help of AI machines can now imitate human intelligence and mimic their actions. Machines have now acquired abilities to learn by themselves and also find a solution when faced with a problem.

Even though robots and machines have become very smart with artificial intelligence, they still lack the ability to touch and feel. Human beings have the ability to be sensitive about the subtleties about their surroundings but now machines can now do it too.

Recently, researchers from the National University of Singapore (NUS) have now developed smart foam which can give machines the ability to sense their surroundings. This smart foam is named as artificially innervated foam or AiFoam.

This is made out of a new material which is soft in nature and feels like a sponge. This material has the ability to mimic the human sense of touch. It also gives robots the ability to sense their surroundings and the objects nearby without any need for a physical touch and it also repairs itself if damaged. 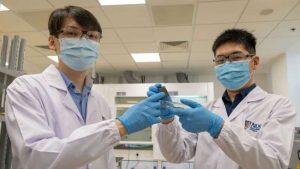 This material was developed by a team headed by Benjamin Tee who is currently serving as an assistant professor at the NUS Department of Materials Science and Engineering, and Institute for Health Innovation & Technology (iHealthtech). The details of this invention are published in the ‘Nature Communications.’

Professor Benjamin Tee said, “We want to show that it is possible to replicate the human sense of touch in a robot, which opens up a new paradigm in the interaction between man and machine for future applications.”

With the help of AiFoam, robots can now become more interactive and even more intelligent. It is also able to perform multiple functions simultaneously. It took the researchers over two years of time to develop the AiFoam.

This foam is very stretchy in nature. It can be stretched for more than two times its size, till 230 per cent. It can go to such lengths without breaking; this itself is enough to demonstrate its strength. In an experiment, researchers heated the AiFoam at 70 degree Celsius for over four days. After facing such damages the AiFoam was capable of healing itself upto 70% after this the material was able to stretch till 180% of its total length.

Professor Benjamin Tee said, “The self-healing properties of AiFoam, as well as its sensitivity to a contact force, will enable robots to better judge human intention, and build a future generation of robots that will react to environmental changes quickly and more efficiently.”

This AiFoam is a combination of Teflon like substance known as fluoropolymer. It is mixed with a surfactant which lowers the surface tension. With the help of this, the material developed was able to fuse back into one piece when separated into pieces.

The nature of this AiFoam can be manipulated and controlled by changing the ratio of air to material. This material is comparatively better performing than other e skin materials such as silicone when it comes to sensing the proximity of human presence.

Professor Benjamin Tee said, “By having a foam with our special formulation, we can sense both pressure and proximity easily.”