Corona Virus pandemic has been affecting countries all over the world. Many economies have been facing a downward spiral because of shut downs in many businesses. With that, people are also facing it kind of difficult to maintain all the formalities regarding covid.

This is a highly contagious disease. So it is extremely important to make sure that precautions such as social distancing are properly maintained. Now a team of researchers at EPFL have developed a technology which will help people to maintain social distancing.

This particular algorithm was initially developed for self-driving cars but it’s now being repurposed for carrying out this activity. This algorithm was developed at EPFL’s Visual Intelligence for Transportation (VITA) Laboratory.

This lab is headed by Alexandre Alahi who is currently serving as an assistant professor.

Lorenzo Bertoni who is a PhD student at EPFL’s Visual Intelligence for Transportation (VITA) Laboratory said, “When Switzerland went into lockdown last year, we were working on an algorithm for self-driving cars.”

He added that, “But we quickly saw that by adding just a few features, we could make our program a useful tool for managing the pandemic.”

The details about this research are published in IEEE Transactions on Intelligent Transportation Systems. The team will also be presenting at the International Conference on Robotics and Automation (ICRA) on 2 June 2021.

The researchers found out that one of the major reasons behind the mass spread of this disease are the extremely contagious micro droplets. These micro droplets spread very fast and are given out in mass quantity by those who sneeze and cough without covering their mouth. 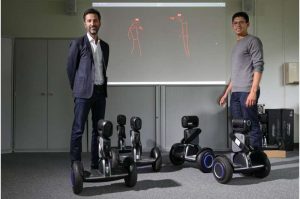 It is extremely important for everyone to maintain a minimum distance of 1.5 meters in case one is not wearing a mask. The researchers then started to update and tweak an algorithm which they had developed for self-driving cars. This algorithm would allow such cars to detect another car or a pedestrian on the road and was capable of slowing down, accelerating, stopping or to change direction.

Lorenzo Bertoni who is lead author of this study said, “Most detectors locate individuals in the 3D space by assuming they’re on the same flat surface. The camera has to be perfectly still and its utility is therefore limited—there are problems with accuracy if, for example, someone is coming up the stairs.”

He also added that, “So we wanted to develop a detector that was more accurate and wouldn’t mistake a streetlight for a pedestrian.”

This algorithm is an intelligent one. It is capable of identifying body orientation of people present and can also determine the interactions between a group of people. It is also capable of evaluating if these people are maintaining a DMs age distance of 1.5 meters.

This algorithm also respects the privacy of the people it is evaluating. The people who are being filmed are kept completely anonymous and it only measures the distance in between the joints of people such as their shoulders, wrists, their hips and knees.

Lorenzo Bertoni in order to provide assurance said, “Our program doesn’t need to store the original pictures and videos. And we believe that’s a step in the right direction with regard to protecting people’s privacy.”