Indian business mogul and philanthropist, Mr. Sanjeev Bikhchandani took to his Twitter account to reminisce his school life as he posted a picture of a certificate from him his school days known as a guarded character certificate.

The certificate which has been printed as a template with the names and other specifications being hand written shows a small insight of the charm of 80s and how far we’ve come ever since.

The certificate from St. Columbia’s School situated in New Delhi says that Mr. Sanjeev Bikhchandani studied in that school from the years of 1969 to 1981 and successfully passed the Indian School Certificate Exams (ICSE) for the 12th grade which was held on March of 1981.

The certificate went on to say that Mr. Sanjeev Bikhchandani had a consistently high attendance percentage and was even diligent in his education. It even says that he was a man of good morals to the ‘best of their knowledge’. They have also manually scratched out the events he participated in which was all of them including debating, elocution, declamation, and dramatics. 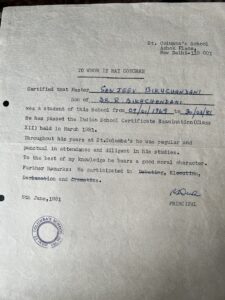 Mr. Sanjeev Bikhchandani has gone on to be one of the most successful businessmen of his generation as he founded and is the executive vice chairman of Indian based pure play internet company Info Edge, which is based in Noida. One of its subsidiaries is the widely successful Naukri.com which is a job portal for employees and employers to connect. He is also one of the founders of Ashoka University, a very prestigious, private university situated in Sonipat, Haryana.

The tweet has been up for just over 2 days and it is on its way on crossing 500 likes. Many people have replied to the tweet and some have even attached their guarded character certificates which looks identical to the one shared by Mr. Sanjeev Bikhchandani.

One of his followers commented on his non-participation of extra-curriculars to which he said that the competition for them were of the highest standards and even though he tried, he never made the cut to participate in them. He also went to say that 4 years after he graduated from the school, the school produced one of the greatest actors the country has ever seen in Shah Rukh Khan.

Many people enjoyed seeing this tweet by Mr. Sanjeev Bikhchandani as it show cases his humble background as a school kid who has now gone to be a very successful businessman.