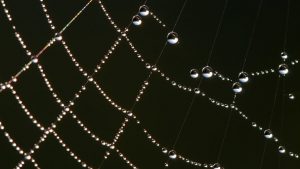 Humans have always been a curious lot. It is this same curiosity that took them to space and to the depth of oceans and the edges of the earth. And yet, the thirst to know more isn’t quenched for there is more in the world that is still veiled and latent. And thanks to artificial intelligence. this quest has received a remarkable speed boost. Discovery of the undiscoverable has become all too easy with artificial intelligence and the potential it offers.

Now, with the help of artificial intelligence, it is possible to discern what a spider’s web sounds like. The signals of spiders which are generally inaudible to the human ears can now be recreated with the help of artificial intelligence. This opens a rather big door to understanding the nuances of their language and the way they communicate with one another.

It is an eerie, foreboding, reverberating tune, enough to send a tingle down your spine https://t.co/9VST89wdFV pic.twitter.com/5bONConjmd

Although it might sound and feel like the opening scene of a horror movie, it doesn’t decrease the intrigue and associated excitement of delving into a new knowledge domain. The sound recorded and recreated touches the realms of eerie, foreboding, and foreboding and it shouldn’t be surprising if it sends a tingle down your spine.

Each of the vibrational patterns heard in the recording indicates behavioral actions among spiders. Although spiders have eight eyes, their sight isn’t exactly clear or on point. This is the reason why they use vibrations to perceive and comprehend what is happening in the surrounding environment. They use these vibrations to determine their next move and course of action, whether it be looking for food or constructing their web.

According to Markus Buehler from the Massachusetts Institute of Technology,

“Spiders utilize vibrations as a way to communicate with the environment, with other spiders.We have recorded these vibrations from spiders and used artificial intelligence to learn these vibrational patterns and associate them with certain actions, basically learning the spider’s language.”