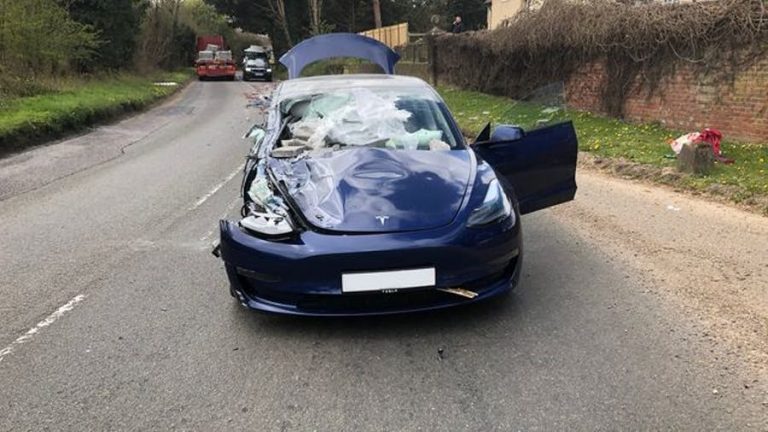 Scottish Football Manager Credits His Tesla Car For Being Safe Unlike this crash, a regular crash like that might have damaged/killed the passengers.

In England, Neill Collins a Scottish football manager and former head coach of the USL Championship recently purchased Tesla Model 3. While driving from their home in Bunwell to Holkham, the Tesla car was hit by concrete bricks.

It happened as the car was turning around and alongside a truck going the opposite side had bricks. As the recording shows, the bricks fell on the car, leading to minor damage to the car and passengers.

The passengers were Neill Collins and his wife Alison. And the Tesla Model 3 was purchased a month before, finished around 700 miles. Additionally, the camera from the dashcam revealed whatever happened during the accident.

As said by Neill Collins, “Before I could react, within a split second, it had gone bang and glass was everywhere, and there was smoke. The next thing I knew, the emergency services were being called. The windscreen collapsed, but it pretty much held. It was quite amazing that we walked away,”

As the video shows, the concrete bricks hit the windshield and the bricks could potentially have hit the passengers inside. However, both Collins and his wife were able to escape the damage, they had minor bruises.

Also, the accident was so serious that the truck driver came out worried to the passengers, after the terrifying incident.

As said by Collins to local news, “I could see the lorry appeared to have gone too quickly around the corner because it was really leaning over, so I thought, ‘Oh blimey, that doesn’t look very good.’ Then we came alongside and I could see the blocks sliding off.”

Not often Tesla cars are given credits for safety factors after an accident. The Football manager makes sure to give the credits, as that was a fatal accident considering how fast they were driving.

Also, as said by him, “It was absolutely shocking, but luckily, my wife and I walked away with minor cuts and bruises. When you get out and look at the car, you think it’s amazing it wasn’t much worse.”

Furthermore, Tesla Model 3 is made of metal structure made of both steel and aluminum. As said by the Tesla website, the car withstood four times its mass despite being an all-glass roof. As an example, they say the vehicle survived the roof crash test with the weight of two elephants.

With this, Collins accidentally identified the safety of owning a Tesla car. By mentioning the accidents in England. Where 22,000 road impact accidents caused by such falling objects are reported every year.