Tesla’s Car Crash Needed 32,000 Gallons Of Water To Put Out The Fire Two people were dead in the accident on Friday in Houston, Texas.

Tesla has always assured that they provide the safest cars, with the highest safety priority. The Tesla driver drove at higher speeds than required. Ultimately led to a crash in Houston on Friday when he couldn’t make a turn. 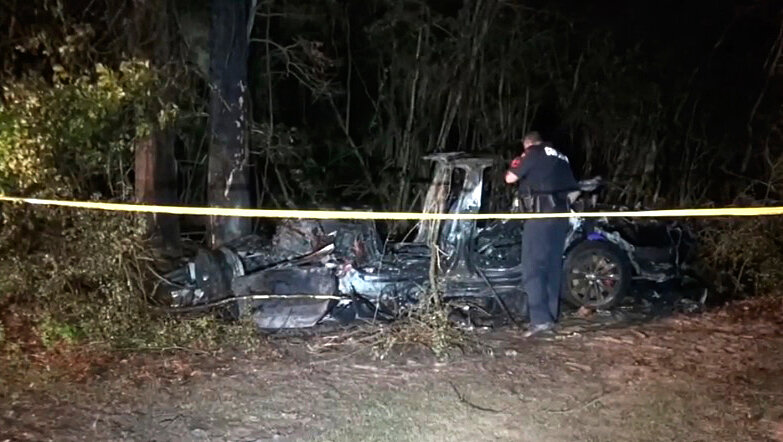 As seen in the above picture, the crash was bad. Furthermore, the battery fire needed 32,000 gallons of water. Shouldn’t the safety of the car also rely on post-accident possibility?

All along, the fuel cars had airbags, auto-unlock systems, etc. This incident raises the question of what about other Tesla driver’s or passengers’ safety. A crash where the passenger shifted to back seat and yet was fully burnt.

How did it happen?

Tesla declined to comment on the situation when various press persons asked on the matter. Whether it happened accidentally, or the owner was playing around with the automated system is unclear.

Herman, a constable in the area said that the vehicle was running at a high speed and failed to turn around. The brother-in-law of the victim stated that the car owner went out with his best friend.

The police speculate that the driver shifted to the back seat, to avoid more damage when 100 meters away from the tree. This brings the question of why the safety system wasn’t installed as some kind of safety mechanism.

In theory, a quick dismantle from the battery in case of an unexpected situation would bring in some safety factor. However, the need to use 32,000 gallons of water took the nearby people by shock. A mother and a daughter were there all along, while the police were trying to extinguish the fire for four hours.

The Huston accident doesn’t have details of whether the car was on autopilot. As Tesla always mentions about the specifications to drive their autonomous. There is nothing much to point out on Tesla.

The company always assures that they give the best safety system compared to other self-driving cars. No matter how twisted the advertisement is, the details are all clear. The driver is supposed to be attentive all the time. Also, the driving videos from the camera are being sent to the Tesla Headquarters. As the system isn’t fully developed there are stringent rules. The company cuts off the services if it is seen that the driver is misusing or not paying attention while driving.

On the other hand, it is also true that there are multiple videos on Youtube as users test the autonomous driving system.

In regards to the recent Tesla crash:

What boggles my mind is that without *any* proof the car had AP on, or was even equipped with it, the media has jumped to the conclusion that AP is at fault.

The FUD, misinformation, and lack of interest in the truth is insane.

Twitter comments have been raging supporting Tesla. As the details are unclear, more speculations are being raised. While the auto-pilot mode doesn’t continue without a driver. The police stated that they think the driver shifted to the backseat as he acknowledges an accident.

If the system is at fault, Tesla is forced to show the video recording inside the car. The wait to get a response from Tesla is getting interesting with time.