The Chairman of the Securities and Exchange Commission (SEC) has urged the cryptocurrency community to collaborate with regulators. According to the Financial Times, Chairman Gary Gensler has asked Congress to give his agency more authority. He has demanded this so that it can properly regulate the market. It is still unclear whose body is in charge of overseeing the cryptocurrency industry. In the opinion of regulators consider bitcoin to be more of a commodity than security. 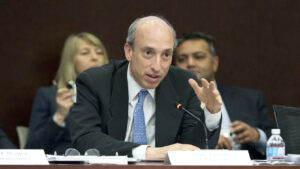 Cryptocurrency is expected to be unknown to less than 10% of the world’s population. Nonetheless, it is a significant enough quantity to force regulators to begin investigating ways to properly regulate these digital assets.

Retail investors are no longer the only ones looking to make a quick buck in highly volatile markets. Institutional investors, such as Michael Saylor’s MicroStrategy, have also thrown their hats in the ring.

It’s All About Trust in Finance

According to Gensler, if the market wants to flourish, it must embrace regulation. The head of the Securities and Exchange Commission emphasised that regulation would restore market trust, which is critical if the market is not to become obsolete over time. “Ultimately, finance is about trust,” Gensler added. Gensler’s attention is mostly on trading platforms, as this is where the vast bulk (95 per cent) of crypto market activity takes place.

Crypto platforms should register with the Securities and Exchange Commission, according to Gensler (SEC). Investors who oppose government regulation of cryptocurrencies reacted angrily to the news. Chairman Gray Gensler, on the other hand, has urged these platforms to register with the government once more. “Come in and talk to us,” Gensler urged.

“There are a lot of platforms out there now that might be more engaging, but instead they’re pleading for forgiveness instead of asking for permission.”

On exchanges, there have been crackdowns on cryptocurrency. The most notable of these have been various countries’ crackdowns against Binance.

Crypto Market Will Benefit From Regulation

Although regulation is a difficult topic in crypto, that does not make it any less important. Exchanges are well aware that if they want to develop in the long run, they will have to collaborate with regulators.

To that aim, Sam Bankman-Fried, the CEO and co-founder of the FTX exchange, stated in an interview that he was “extremely serious” about regulating. Working with regulators, according to the CEO, will assure the industry’s longevity. Exchanges cooperating with regulators will ensure that the rules curated do not undermine the market, effectively “killing the use for it in the first place,” according to the report.

When it comes to regulatory regulations, it’s still unclear where most crypto products sit. However, according to Gensler, decentralised finance systems are under the SEC’s jurisdiction. Gensler told the Aspen Security Forum, “It doesn’t matter if it’s a stock token, a stable-value token backed by securities, or any other virtual product that gives a synthetic exposure to underlying securities.” “These products are governed by securities regulations and must operate inside our regulatory framework.”