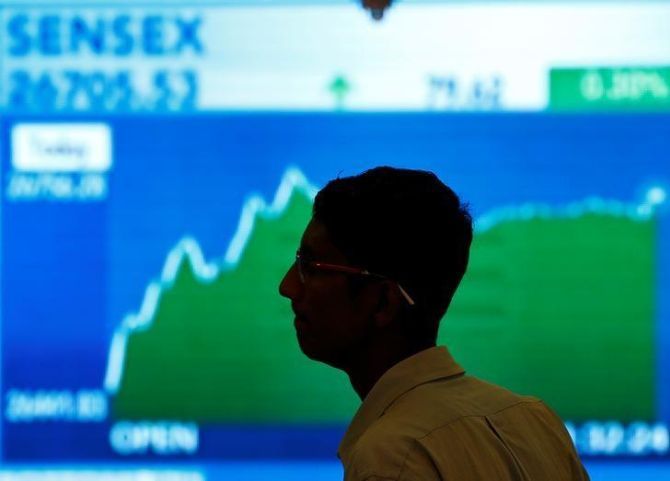 S&P BSE SENSEX and Nifty 50 on Wednesday closed their markets with considerable gains for third consecutive session. Even though both the indices declined in the initial trading hours, Banking, and Auto stocks helped the market get back into the growth lane.

The initial decline in the market was due to Indian rupee hitting 80 mark against US dollar for the first time in history.

Banking stocks gained the most on Wednesday, as the top gainers on Sensex 30 were Axis Bank and Indus Ind Bank. Both stocks gained more than two percentage value in their share prices  to conclude the trading at 700.55 and 868.50 respectively.

Mahindra and Mahindra was able to increase its share value on Wednesday as the company increased its investment in Sampo Rosenlew Oy to 100%. The acquisition of an extra 20% stake in Finland based company rendered enough confidence to traders to trade M&M shares.

As the market performed considerably well today, 19 out of 30 stocks advanced, while the rest of the stocks completed their trading in red.

Private banks index at Bombay stock exchange did considerably well on Wednesday as the index gained 137.00 points to close their market at 13305.98.

10 out of 12 stocks concluded their trading in green while Kotak Bank lost 0.65 percentage of share value and ended up at 1833.65 points. HDFC Bank saw no change in its share value today.

Fast moving consumer goods index on the Bombay stock exchange did not gain much on Wednesday, as the index saw only an increase of 17.06 (0.11%). Top tier FMCG stocks such as Nestle India, ITC and Everyday concluded trading day in red.

Out of 3454 stocks traded on Wednesday 1975 stocks advised while 1337 stocks the client 142 stocks remain unchanged.

29 stocks in the index progressed, while 21 stocks plunged on Wednesday.

Asian and European markets traded on a mixed note today as few markets closed their trading in red while other few advanced. Asian markets such as Seoul and Hong Kong ended the trading in the red, while Tokyo and Shanghai increased their market value.

In the United States, Dow Jones Industrial Average Index and NASDAQ Composite Index are trading in green (as of 19 July, 10:33 am EDT ).

Meanwhile, Brent Crude, which is considered an international benchmark for oil, saw a decrease in its price by 0.57% to 105.7 dollars per Barrell.