Shiba Inu becomes the 20th most valuable digital asset by market capitalization so far in October. Shiba Inu’s market value jumped to $11.08 billion earlier this week and is now above $10 billion, putting it in the top 20 for the first time. As a result, the Dogecoin-inspired parody cryptocurrency has surpassed big blockchain projects like Stellar (XLM), Polygon (MATIC), and Tron (TRX) (TRX). 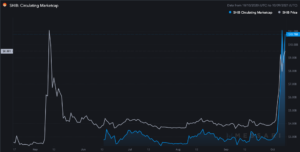 After starting the fourth quarter of 2021 at $0.00000725, the SHIB price increased by about 400% in a week. As a result, on October 7, the token retested its five-month high of $0.00003528. Nonetheless, on the same day, SHIB had a 40%+ market fall as some traders decided to unwind their spot bets for interim profits. As a result, Shiba Inu’s market capitalization plummeted in lockstep, reaching $8.06 billion on Friday. 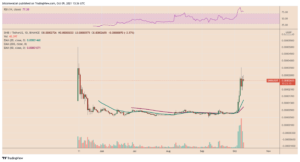 The sell-off in Shiba Inu markets (against the dollar and Bitcoin) led investors to buy on the dip. The SHIB price increased by more than 45 percent as a result of the rebound surge. The token was trading at $0.00003020 at its peak on Saturday, with a market cap of $10.73 billion.

What is SHIB’s next phase?

On October 9, the Shiba Inu price fell more than 5% to a new intraday low of $0.00002575. As a result, the cryptocurrency appeared to be building a probable descending triangle pattern, implying that more losses are on the way.

Descending Triangles, like the ones SHIB has produced in the chart below, are often bearish patterns that occur when the price moves lower while oscillating between an area defined by two converging trendlines: one descending and the other horizontal.

The creation of lower highs atop a support line that is at a standstill shows that traders’ buying sentiment is waning. As a result, the price tends to break below the horizontal trendline in the long run. As a result, its target moves to a level with a length equal to the Triangle’s maximum height.

In other words, if the above-mentioned support level fails to hold, SHIB price may fall below $0.00001000 in the next sessions.

SHIB has recently garnered considerable attention on Twitter. According to Cointrendz statistics, the coin was mentioned in 4,862 tweets at press time, making it the second most-discussed cryptocurrency on Twitter after Bitcoin. It was the announcement of Shiba Inu joining WhiteBIT.

We are happy to announce that @Shibtoken ($SHIB) will join our exchange on the 7th of October.

Elon Musk’s tweet on 4th October triggered a rise in Shiba Inu’s stock price. The Tesla CEO captioned a photo of his pet dog, a Shiba Inu, with the remark “Floki Frunkpuppy,” on Oct. 4. Within one hour of the tweet, SHIB had increased by more than 40%.

Speculators in the cryptocurrency market have a habit of reading too much into Musk’s tweets. For example, earlier in 2021, the millionaire entrepreneur was instrumental in driving the price of Dogecoin (DOGE) higher via Twitter.

Also read: 17 crypto exchanges in Russia are in deep trouble