‘Skybrators’ : The future of wind power 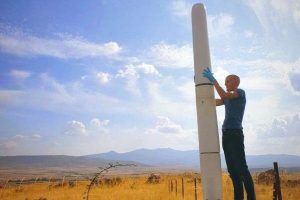 Energy is an important facet that literally fuels life. However it is an undeniable fact that most of our energy requirements entail a cocktail of environmental concerns. Added to this roadblock is our dependence on exhaustible resources. This is where wind power becomes the saving grace, addressing both the concerns. It opens a door to clean and sustainable energy. However, every coin has two sides, so does wind power. Large wind farms carry with them the factor of environmental impact that can prove to be harmful.

In response to these crucial questions of environmental safety, Vortex Bladeless, a Spanish company has brought forth a model for bladeless wind turbines, that could help reinvent the whole equation of wind power and how the world deploys it. With the bladeless turbines, the harmful effects of traditional wind mill style turbines which raises a threat to birds and wildlife are addressed efficiently. According to the company, this innovation will have two fold benefits of generating clean energy while also keeping environmental safety in check.

Vortex- induced, vibration-resonant wind generator is the descriptive name for this promising step of technology, however a much more fitting name was given by Reddit users – ‘Skybrator.’

The design of the turbine features a lightweight cylinder, vertically fixed with an iron rod.  The cylinders generate electricity from the vibration induced by the oscillation. The point of intrigue is that the technology facilitates the capture of wind power even in the absence of strong winds. This is a result of the generators creating their own movement. Added to these features is its relatively noiseless poise, with a frequency that is undetectable to the human ear. The gaps and blocks in the existing wind power strategies could be effectively filled by the turbines. The model is a small scale wind option that is fitting for both rural and urban settings. It provides an efficient alternative to the disruptive large scale wind farms which occupie too much space.

According to David Yanez, the creator of Vortex Bladeless,

“Our technology has different characteristics which can help to fill the gaps where traditional wind farms might not be appropriate.”

Although, at present the company’s plans are limited to field tests on small models, it intends to create versions that are about 450 feet tall, and which includes the capacity to generate electricity of 1 megawatt each. The plan is still on paper, however, with the right industrial partner, it wouldn’t be long before the plans are realized.