Robots have been used in various human centric fields to carry out many operations. There are robots which are functional in the medical field and also in the education field. Such robots are designed in a manner that seems to be friendly and hospitable. This makes them quite approachable and people are put at ease around them.

There have been instances when robots proved to be better performers than humans while handling crises. Many researchers and computer scientists all over the world are now studying about the possibility of incorporating robots into the classroom.

In order to explore this possibility further, researchers at the Norwegian Computing Center have made use of robots in order to teach the immigrant children who are residing in the Grorud district in Oslo, the Norwegian language.

The study was carried out by Trenton Schulz and Till Halbach. They said that, “The main inspiration for our study was the fact that some districts in Oslo have a large number of children that do not speak Norwegian at home.”

They further added that, “Daycare centers have programs to help these children learn Norwegian. One of these programs, called ‘language shower,’ is designed to expand the children’s vocabulary. Our study explored the possibility of using robots to deliver this program.” 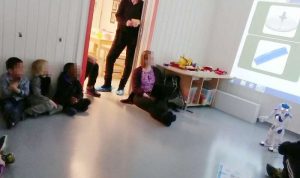 The details about this research are published in arXiv and were presented at the ACM’s Human-Robot Interaction (HRI) Conference. At this occasion, the team demonstrated what would be some of the possible benefits if robotic systems are introduced at the early learning environments.

The main objective behind the study conducted was to provide support to those teachers which are delivering the language learning program by using the social robot. A study was conducted in 2018 in order to evaluate the effectiveness of this robot named Nao.

The sessions were designed and at a time maximum of 15 students were able to attend it. This robot was able to produce pictures of the items that the children were trying to learn. The robot, Nao, would then ask the children to say what they were seeing out loud. This robot is equipped with a speech recognition engine. This helps it to process whether what the children have said is right or wrong.

While explaining the workings, Trenton Schulz and Till Halbach said that, “The robot acted as a lesson leader, guiding the children through a lesson on the tablet.”

They also added that, “The tablet would show pictures of different things and ask children to say what it was. It would then listen and say whether a child’s answer was correct. Finally, the robot performed different actions, playing songs and dancing if the children answered correctly.”

Trenton Schulz and Till Halbach said, “Overall, we feel that the pilot studies we carried out were successful, as the children who participated seemed to enjoy interacting with the robot.”

While adding to that they said, “We are currently evaluating whether the children’s vocabulary develops more than when they take part in the conventional version of the ‘language shower’ program (i.e., without the use of robot technology), through a six-week study.”

The application that is developed by the researchers can also be used remotely without a Nao robot. The parents can easily download this application and can use it themselves in order to learn Norwegian language or to improve it and to also help teach and practice at home.