Sorare, a blockchain-based fantasy soccer game, has raised $680 million in a funding round headed by SoftBank, with ex-England international Rio Ferdinand and Spain’s Gerard Pique among the investors, the firm announced on Tuesday. 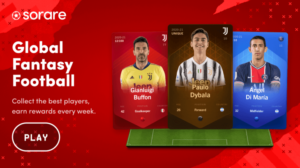 Sorare, based near Paris, said the investment was worth $4.3 billion. Sorare is an online game where participants buy officially licensed soccer player cards and form teams to compete against one another, with the outcome determined by the players’ performance in real-life games.

Non-fungible tokens (NFTs), a type of crypto asset that maintains the ownership status of digital commodities on the blockchain, are used to trade the cards. In 2021, the market for NFTs exploded, with collector and sports-related tokens being the most popular.

In an emailed statement, Michel Combes, president of SoftBank Group International, stated, “We believe NFTs represent a new paradigm in the collectability, use, and interaction with assets.”

“This shift from physical to digital assets is really strong, and it opens up a slew of new business opportunities.” According to NonFungible.com, a website that tracks NFT market data, Sorare is the largest sports-based NFT platform by sales volume. It intends to create an office in the United States and diversify its business outside soccer.

“We realized the enormous potential that blockchain and NFTs had to unleash a new method for football teams, players, and fans to feel a closer relationship with one another,” Nicolas Julia, Sorare’s CEO, and co-founder said.

SoftBank made its first investment in Sorare through its SoftBank Vision Fund 2 during the financing round.

SoftBank’s Latin America fund also contributed, according to Combes, because SoftBank can leverage its contacts with the US and Latin American soccer leagues, as well as its stake in broadcaster Televisa-Univision, to grow Sorare’s user base in the region.

SoftBank isn’t new to NFTs: in July, it led an investment in the NFT marketplace OpenSea, and in March, it invested in the decentralized financial platform Juggernaut. Other investors in Sorare’s round include Accel and Bessemer Ventures, as well as footballers Pique, Ferdinand, Antoine Griezmann of France, and Cesar Azpilicueta of Spain.