On 23 July, NASA anounced that SpaceX is going to send the Europa Clipper spacecraft towards Jupiter’s ice Europa moon. Scheduled for October 2024, SpaceX will be using Falcon Heavy which is yet to be fully built and tested. 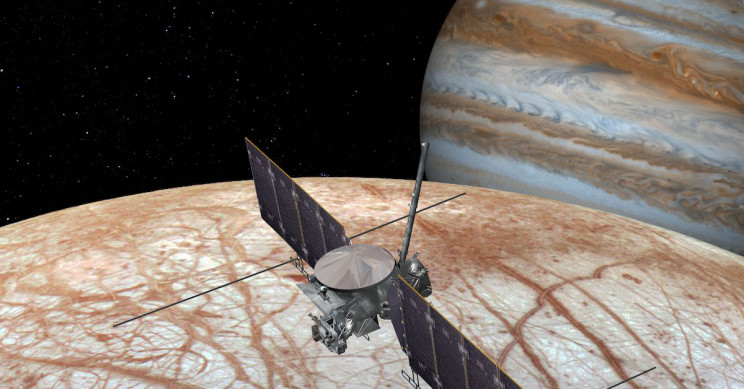 Flacon Heavy was launched 3 times to date and is known as one of the most powerful rockets ever made. Not only the rocket is strong but has the ability to lift twice the payload of the closest operational vehicle. SpaceX’s current launches of Starlink and crew-dragon to the space orbit were from Flacon 9. And the Flacon Heavy rocket has three Falcon 9 engines forming 27 Merlin engines. Together they produce over 5 million pounds of thrust at liftoff.

Falcon Heavy will be launched from the historic launchpad 39A at NASA’s Kennedy Space Center in Florida. The agency stated in a press conference, “The total contract award amount for launch services is approximately $178 million.” NASA would be saving $2 billion by sending SpaceX Falcon Heavy to the Jovian system.

Originally the launch was supposed to happen from Boeing’s Space Launch System (SLS) rocket that is currently under construction. As the SLS rocket is expensive and has many issues yet to be solved, using Falcon Heavy rocket would launch the mission on time.

Once the rocket is launched into space in 2024, it would reach Jupiter by 2030, crossing 383.33 million miles away from earth. Falcon Heavy will be launching Europa Clipper to Jupiter’s Europa moon. Jupiter’s Europa moon is found to be potentially habitable for humans. Europa Clipper would search the moon for any signs of alien life. Studying Jupiter’s moon will continue for four years. It is said that underneath the icy surface, there is water, and is the best bet by scientist where living thing potentially exists besides on earth in the solar system.

It is said that with the SLS rocket, the Clipper would have reached Jupiter within 3 years with a direct-to-Jupiter trajectory. Now with Falcon Heavy, the clipper needs speed-booster flybys to fly around from 2024 to 2030.

The best place for the Europa Clipper to land would be the Europa moon. It is one of the smallest of the largest visible moons around Jupiter. Initially discovered by Galileo, Jupiter’s moons are of interest to many scientists. As said by the agency, “Europa Clipper will conduct a detailed survey of Europa and use a sophisticated suite of science instruments to investigate whether the icy moon has conditions suitable for life. Key mission objectives are to produce high-resolution images of Europa’s surface, determine its composition, look for signs of recent or ongoing geological activity, measure the thickness of the moon’s icy shell, search for subsurface lakes, and determine the depth and salinity of Europa’s ocean.”