The most recent launch by SpaceX using the transporter 1 rocket made a record of the most satellites launched at once. Earlier, this record was held by an Indian rocket that launched 104 satellites together. This mission was also critical as it bought the rideshare program to the limelight. Of all the satellites launched in the mission, only 10 were Starlinks, while the rest were private and government satellites. SpaceX also charged a very minimal amount for this rideshare mission at about $15,000 per kg of payload. SpaceX’s 143 satellites launched made history and also opened SpaceX to new business.

The launch of the satellites happened using a Falcon 9 rocket and was called the Transporter-1 mission. The rocket took off at 8:31 PM IST from Cape Carnival in Florida. Indian Tracking centers and ISRO also picked up SpaceX’s rocket as the rocket flew over the country. Do note that the Falcon 9 used in the launch was also used multiple times. It had already been used 4 times before, and this was the 5th successful launch using the rocket. 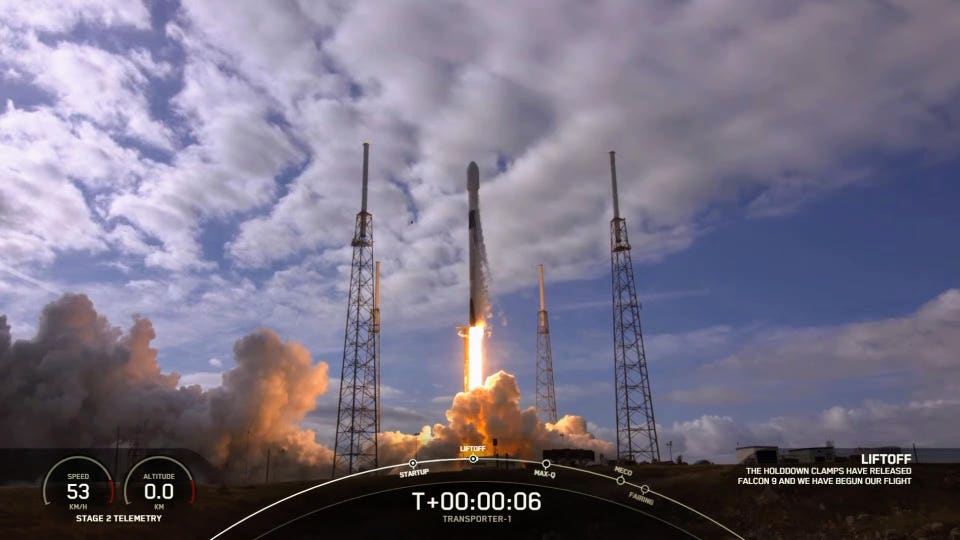 Companies that took part in the rideshare mission are also very satisfied with the launch and with SpaceX. Many of them commented about the entire process of getting a seat in the launch, saying it was very smooth. At the same time, the cost of launching their own satellites using a rideshare program is very cheap. This is due to the fact that SpaceX has bought down the operational cost of their rockets by a huge margin. Reusing their rockets is one of the ways on how they did that. Before this launch, Rideshare missions were not something famous, but that has changed now. Though the idea existed for a while, it was never implemented before by anyone other than SpaceX. Now smaller companies are also developing smaller rockets that can work independently with companies to provide dedicated service to them. But whatever it is or will be, I don’t think they can provide a price that’s less than SpaceX. The company is now much ahead of others in terms of technology used and the cost of their vehicles. In order to reach here, they had to do years of hard work, and therefore it won’t be easy for anyone else to beat them at their own game.

What are your thoughts on SpaceX’s 143 Satellites launch? Do let us know in the comments below. Also, with all the hype around Starlink, do you think it is the future of the way we use the internet nowadays. And if you found our content informative and useful, do like and share it with your friends.