Start-ups Predicted to Fire 60,000 Employees This Year Indian startups have already laid off around 6,000 employees in the last five months.

Although Indian start-ups have increased in number and grown and scaled up to be massive players in the Indian economy, it doesn’t seem to be smooth sailing for entrepreneurs. Just by scratching the surface, you can see some of the cracks unfold.

The first five months of the year has already seen over 6,000 employees lose their jobs at start-up companies in the country. According to many experts, the streak of lay offs is set to increase however with many experts including the co-founder of Glamyo Health, Mr. Archit Garg saying that this number is very likely to multiply by 10 putting the score of employees laid of by Indian start-up companies at 60,000.

Mr. Garg went to say that with the way funding and growth trend are going in the country, it would take the rest of the year for the streak to lose fire and until then, we will be seeing start-ups companies based in the country to be letting go of their employees very regularly.

He said that the education tech industry witnessed a massive boom and serious growths over the past few years due to the pandemic and schools being shut. But with educational institutions opening up now, it seems like the glory days of the industry is over and they will have to down size their company to keep up with their slump. The industry will have to get used to the new trends in the industry meaning that they will be forced to let go of many valued employees. 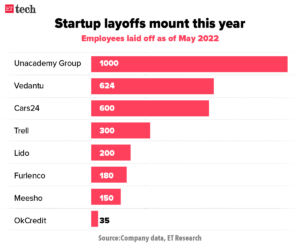 Many companies that have grown to reach the summit of their industries have been forced to take the tough decision of letting their people go. Ola for example, is the top cabbing service company in the country as they have been locking horns with Uber for years now. The company has laid off well over 2,000 employees just this year. Unacademy too, one of the largest players in ed tech field has come to the reality that the industry’s best days are behind them and has laid off close to 1000 of their employees. Vedantu is another company in the same player that was forced to make the same choice and laid off well over 600 of their employees while Cars24, an automobile reseller was forced to let go around 600 employees as well. These are not great times for the employment situation in India and some action needs to be taken by businesses and the government.