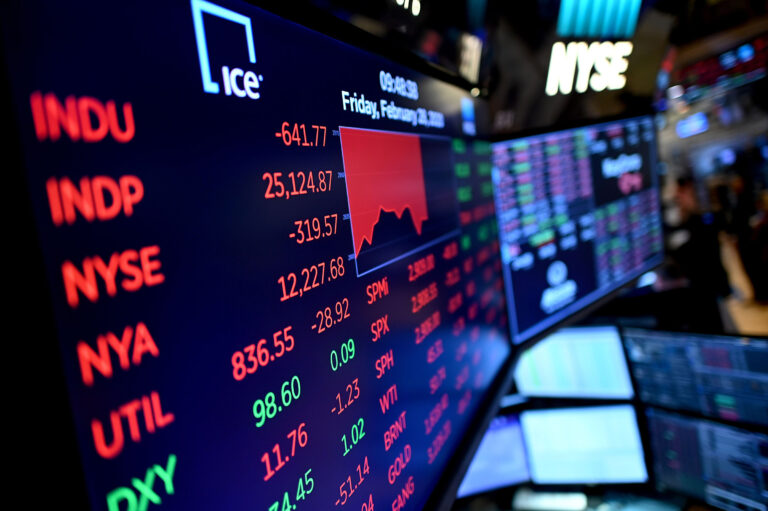 Stock market charts are seen during the opening bell at the New York Stock Exchange (NYSE) on February 28, 2020 at Wall Street in New York City. - Losses on Wall Street deepened following a bruising open, as global markets were poised to conclude their worst week since 2008 with another rout. (Photo by Johannes EISELE / AFP) (Photo by JOHANNES EISELE/AFP via Getty Images)
Home
Markets

US stocks dropped sharply on Friday as the new COVID variant reminded investors that threats from the deadly pandemic are still alive, even after widespread vaccinations and improvements in therapies.

US equity markets are likely to remain volatile during the coming week as investors continue to focus on Omicron, the new coronavirus variant which seems to be spreading quickly, forcing many governments to restrict travel from some African countries where it was first detected.

Sell first, get answers later. With stocks near lifetime peaks, the Black Friday reaction to the new fast-spreading virus strain Omicron was hardly surprising. Such thinking might lead to selling too early and missing out on the huge gains down the road.

But a weekend later, investors look heavily engaged in buying the dip, as markets take a more balanced view of risks attached to what the WHO called a “variant of concern”.

Zoom shares closed up 5.7% and Peloton stock closed up 5.6% Friday as concerns of a new Covid variant in South Africa tumbled markets. Shares of Netflix and Roku, two other stay-at-home companies that have benefited from the pandemic, were up about 1.6% for the day.

Zoom and Peloton are still down 34% and 69% for the year, respectively, as people have returned to work, school and gyms.

“We should know about the ability of the current vaccine to provide protection in the next couple of weeks,” Burton said Sunday on the BBC’s “Andrew Marr Show.”

“If we have to make a brand new vaccine, I think that’s going to be early 2022 before that’s really going to be available in large quantities,” he said. “The remarkable thing about the mRNA vaccines, the Moderna platform, is that we can move very fast,” he said.

If Moderna’s current vaccine is shown to defend against the new coronavirus strain. Then the demand for the drug could rise as more people seek its protection. If, on the other hand, Moderna’s existing vaccine is not effective against the new variant. The drugmaker could find itself in a position to develop a new drug. It could potentially sell in addition to its current vaccine. Both of these scenarios would bode well for Moderna’s sales and profit growth, which is likely why its stock rose sharply today.

Moderna currently earns all of its revenue from Covid-19 vaccines, but the company does have an exciting future beyond the current pandemic. Moderna has developed a platform for rapid development and production of mNRA vaccines. Clinical trials are currently being conducted for vaccines for influenza and the respiratory syncytial virus.

BioNTech’s stock was up 5% on that day alone, after the FDA granted that authorization for boosters of both Comirnaty. Moderna’s (NASDAQ:MRNA) comparable mRNA-1273. This was especially welcome news given that coronavirus cases have leaped to a six-week high as the cold weather starts to bite across the U.S.

The Comirnaty booster had previously been authorized for adults, but only those in certain categories (the immuno-compromised, for example). Roughly 31 million U.S. adults in those groups have received boosters; with the expanded approval, a great deal more are sure to get fresh jabs.

While Comirnaty is BioNTech’s only approved product, the biotech is making a hard push to be more than just a coronavirus stock. Somewhat lost in the satisfaction of the latest FDA booster approval is the fact that the company’s efforts in the cancer treatment sphere are bearing fruit.

Also on Friday, BioNTech happily announced that the FDA had granted Fast Track Designation to one of its leading pipeline treatments, BNT111, in the fight against advanced melanoma. BNT111 is an immunology drug based on the company’s FixVac platform that utilizes mRNA to fight disease.

So the battle against the coronavirus is going to continue to need all the forces it can muster. While BioNTech is forging well ahead in the very crucial oncology segment. This week’s news was very positive for the company. So it’s no surprise it was rewarded by investors with a healthy share price bump.

Crowdstrike provides cloud-native endpoint security software. Co-founder and CEO George Kurtz used to work at McAfee before leaving to launch Crowdstrike when he realized a new company was needed to provide security solutions for the cloud environment. The move paid off as Crowdstrike is now among the leading names in cybersecurity.

Crowdstrike is rapidly expanding its subscription customer base and reported 81% year-over-year growth during its fiscal second quarter ended July 31.

Unsurprisingly, revenue is growing quickly. Subscription revenue grew 84% and made up 92% of the total in fiscal 2021. Although it only has annual recurring revenue of $1.34 billion, it believes the total market opportunity will expand to $106 billion by 2025.

Looking forward, Crowdstrike is projecting 60% revenue growth in the current year and non-GAAP net income per share of $0.46. As Crowdstrike continues adding more customers and expands with existing ones, it will scale, pushing it closer to its target of a 30% free-cash-flow margin.

Cybersecurity is a huge opportunity, and strong competitors are vying for contracts. However, Crowdstrike’s offering is a more effective and comprehensive security solution than alternatives.

Roku‘s (NASDAQ: ROKU) stock plunged 11% on Nov. 17 after the streaming device and software company was hit by an analyst downgrade. MoffettNathanson analyst Michael Nathanson cut Roku’s rating from “neutral” to “sell” and reduced his price target from $330 to $220.

In a note to investors, Nathanson said Wall Street’s long-term revenue and earnings estimates for Roku were “too damn high”. In order to achieve these targets, the company needed to monetize an “absurdly high portion” of its ad impressions on “long-tail” video streams — content below the level of top-tier hits. Nathanson believes Roku’s revenue growth will decelerate, and that its margins will be squeezed by higher content costs and R&D investments.

Those numbers suggest that Roku’s growth peaked in 2020, but investors should remember three things.

First, Roku’s growth accelerated significantly during the pandemic as more people stayed at home. But it now faces tougher year-over-year comparisons in a post-pandemic market.

Second, Roku’s player sales, which accounted for 17% of its top line in the first nine months of 2021. They are being temporarily disrupted by component shortages and other supply chain constraints.

Lastly, those supply chain challenges are causing some companies to reduce their ad spending. Which could generate near-term headwinds for Roku’s platform business.

But at the same time, Roku’s three core metrics — its active accounts, streaming hours, and average revenue per user (ARPU) — all improved both sequentially and year-over-year in the third quarter.

Shares of The Trade Desk (NASDAQ: TTD) have gained 33.6% so far this week, according to data from S&P Global Market Intelligence. The manager of digital ad-buying platforms posted analyst-stumping third-quarter results on Monday, followed by an avalanche of bullish analyst reactions.

The Trade Desk’s top-line revenues rose 39% year over year to $301 million, while your average analyst would have settled for sales near $284 million. Adjusted earnings increased by 38% to $0.18 per diluted share. It also leaving the consensus Street estimate behind at $0.15 per share.

Management highlighted strong ad-buyer demand for data-driven marketing campaigns. The recently launched Solimar service taps into the market’s thirst for data-based solutions by consolidating. The Trade Desk’s older ad-targeting and performance-measurement tools into a single interface. This way, clients have easy access to ad-efficiency data right next to their tools for launching new marketing ideas.

Enphase Energy reported third-quarter 2021 adjusted earnings of 60 cents per share. It surpassed the Zacks Consensus Estimate of 47 cents by 27.7%. The bottom line improved a solid 100% from 30 cents reported in the prior-year quarter.

Including one-time adjustments, the company posted GAAP earnings of 15 cents per share, down 46.4% from 28 cents in the year-ago quarter. It has been about a month since the last earnings report for Enphase Energy (ENPH). Shares have added about 18% in that time frame, outperforming the S&P 500.

Enphase Energy’s third-quarter revenues of $351.5 million beat the Zacks Consensus Estimate of $344.9 million by 1.9%. The top line soared 96.9% from the year-ago quarter’s $178.5 million. It was driven by strong demand for its microinverter systems and increased shipments for Enphase Storage systems.

For fourth-quarter 2021, Enphase Energy expects revenues of $390-$410 million. The Zacks Consensus Estimate for the same is pegged at $375.7 million, lower than the company’s guided range.

Enphase Energy more than quadrupled its revenue in the last five years. If the company continues to grow at this rate, it could reach rival SolarEdge’s scale in revenue five years from now.

Enphase Energy has a very long runway for growth. The U.S. Energy Information Administration projects that the share of renewables in U.S. electricity generation will double to 42% in 2050 from 21% in 2020. With solar becoming the largest source of renewable generation in the U.S. by 2040. Solar companies are the obvious beneficiaries of this expected growth.

Estimates have been broadly trending upward for the stock, and the magnitude of these revisions looks promising. Notably, Enphase Energy has a Zacks Rank #3 (Hold). We expect an in-line return from the stock in the next few months.