Many industries are now using robots in order to carry out most of its heavy and dangerous tasks. As we proceed, one can’t deny the probability of robots being used more and more into the industrial sector. With that being said, robots are only used to carry out simple tasks. When it comes to carrying out complex manipulation actions, humans are still required.

This is the reason why we don’t see many robots when it comes to, for example, processing and handling of food products. In order to carry out such tasks a robot is required to learn complex manipulation skills and for that a visual and tactile learning combination is required. To put it simply, the robot’s must learn and be able to see and feel at the same time.

Ekrem Misimi is a SINTEF researcher and is currently working on developing a robot learning technology. This research is a part of the iProcess project.

While speaking about this research Ekrem Misimi said, “If our aim is to automate some or all these tasks in the food industry, or in other areas, we have to equip the robots with new knowledge via learning.”

They also added that, “They have to learn the so-called soft skills first so that they will be able to execute operations at the same level as humans in the future.”

The entire robotics industry faces a limitation when it comes to handling objects that are soft, fragile, pliant or malleable. This is due to the reason that these objects quickly change their shape when handled. In the case of humans, we can sense and process these changes in real time; but when it comes to robots, in order to carry out the same task they would require advanced visual and tactile sensors. 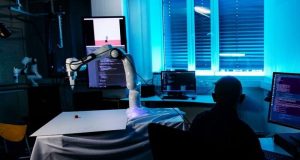 The robot under this research is provided with artificial ‘eyes’ with the help of 3 D vision and an artificial brain using Artificial Intelligence (AI) along with sensitive ‘hands’ that make use of force and tactile sensing.

Ekrem Misimi said, “These qualities enable the robots to develop a task-specific intelligence that is good enough for them to do the job automatically.”

While adding to that they said, “Our aim is to get the robot to learn how to perform real-world complex manipulation tasks from simple examples.”

The researchers, under the iProcess project have come up with two learning methods. The first method is ‘Learning from Demonstration’ (LfD). With the help of this learning method, the robot is able to grasp soft food items by using a combination of visual and tactile sensing.

The second learning method is named as ‘Learning from Self Exploration’. Under this method the robot makes use of Artificial Intelligence (AI) in order to learn a task by itself in a simulated environment before it is deployed to carry out tasks in real world conditions.

Ekrem Misimi said, “This project is a milestone in realizing this vision. Robot technology will be able to increase both competitiveness and profitability and will enable a greater proportion of raw food material to be processed in Norway.”

They also added that, “This can contribute to increasing the products’ quality and reducing food waste. Moreover, this will benefit the environment, as raw materials will not have to be transported abroad for refinement, as often must be done today.”