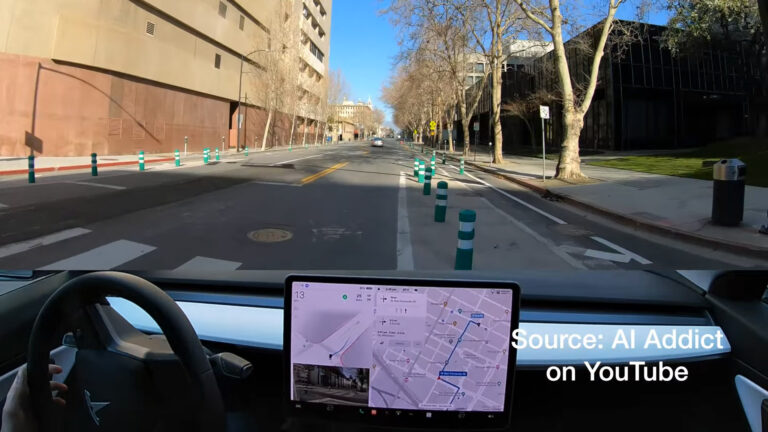 Tesla Full Self-Driving Beta has always been criticized over years every time there was a Tesla accident. However, there were no proper claims, and many times the US road regulators found out that the resulting Tesla crash was not because of FSD Beta. Now, for once there is a crash because of FSD Beta in a Tesla vehicle that was caught on camera. It is only a small accident causing paint damage. According to Tesla CEO, Elon Musk this is the first time in a year the FSD caused an accident.

In what could very well be the first accident with a Tesla car in a Full Self-Driving (FSD) mode recorded as it happened. Then the EV crashed into a bike lane pylon to no fault of the driver who was alert and behind the wheel at all times, just as required. YouTuber and Tesla owner AI Addict decided to take the newest FSD Beta 10.10 update for a literal spin around the sunny San Jose streets. Until about 3:20 into the video the autonomous driving algorithms behaved admirably, taking turns left and right, changing lanes, and ramping on exits with aplomb.

At 3:25, however, the Tesla’s sensors didn’t detect a green-and-white bike lane pylon sitting in the shade during a right turn (or the FSD software didn’t react) and the car slammed into it directly.  Despite the driver’s quick reaction to grab the wheel and try to turn it in the opposite direction, however, Tesla took the bike lane separator in a head-on collision.

It was a small accident that only caused a little paint damage, but it technically crashed into an object. It’s important to note that Tesla doesn’t take any responsibility with the Full Self-Driving Beta (FSD Beta). It’s considered an early version of Tesla’s self-driving software that is currently being tested by a fleet of Tesla owners selected by the company and through its “safety test score.”

The software enables the vehicle to drive autonomously to a destination entered in the car’s navigation system, but the driver remains responsible for the vehicle and needs to remain vigilant and ready to take control at all times. the cornering speed was rather low and those pylons rather flexible by design, so AI Addict and his passenger were unharmed while the Tesla got just a bumper scratch at the front. However, in the end, it was interesting that the incident was caught on camera. Over the past year, videos shared were mostly about the FSD getting better. This incident showed the realistic example of using the driver-assist feature. Reminding to be attentive while driving the vehicles with driver assist feature as well.