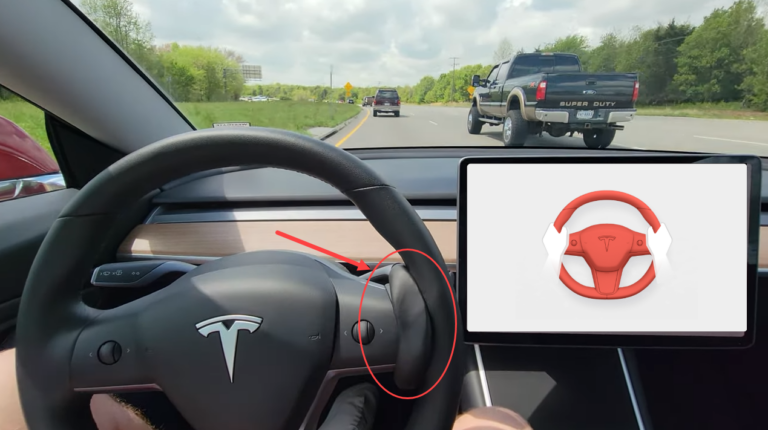 Tesla’s software can now detect the cheating devices that enable one to hold the steering wheel. It acts as if the vehicle has hands on it. However, Tesla has always stated that any driver using Autopilot and Full Self-driving (FSD) Beta should keep their hands on the steering wheel. So far on many occasions people used cheating devices and risked going in the car without any attention to the road.

It pushed some people to use what has been called “defeat devices.” It can be as simple as jamming a water bottle in the steering wheel to apply some pressure to some custom-made devices to trick Autopilot’s driver monitoring system. It appears that Tesla has been working on improving it and, now the vehicle can detect it.

NHTSA even had to intervene and ban devices that were clearly marketed for that purpose. One of those Autopilot defeat devices tried to come back as a phone mount, but it was shut down again. Now Tesla is trying to address the issue through software directly. Teslascope, which digs into Tesla software updates, found something interesting in the latest FSD Beta update. Tesla can now detect Autopilot defeat devices, and it forces drivers off Autopilot if detected.

Upon the wide release of V11, it is assumed that the "strikes" system will be removed.

The usage of these devices will continue to result in autopilot disengagements and will prevent further activation until the next drive (similar to behavior right now).

FSD Beta enables Tesla vehicles to drive autonomously to a destination entered in the car’s navigation system, but the driver needs to remain vigilant and ready to take control at all times. Since the responsibility rests with the driver and not Tesla’s system, it is still considered a level-two driver-assist system, despite its name. It has been sort of a “two steps forward, one step back” type of program, as some updates, have seen regressions in terms of the driving capabilities. Tesla has frequently been releasing new software updates to the FSD Beta program to improve performance with the goal of becoming safer than human drivers and adding more owners to it. For the last six months are so, there have been over 100,000 Tesla owners in the program, but CEO Elon Musk said that FSD Beta would be available to every owner who bought FSD Beta in North America by the end of the year.

With the technology still in beta and undoubtedly dangerous if drivers are not paying attention, Tesla is trying to find ways to try to make sure drivers are really putting their hands on the wheel and ready to take control at all times. Tesla has also been increasingly using its cabin-facing camera to monitor driver attention, and it has been known to send driver warnings when their gaze is not on the road.