Ukraine Deputy Prime Minister and Minister of Digital Transformation Mykhailo Fedorov stated that Tesla Powerwalls will be used in the country. They will be powering two ambulant clinics with solar energy. They are located in Borodyanka and Irpin. 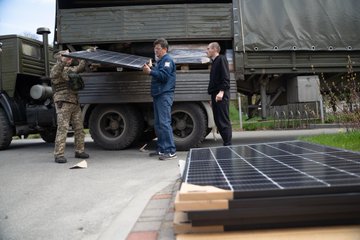 Fedorov noted that the Tesla Powerwalls are particularly useful since the batteries help store energy. This is a critically important advantage considering that both Irpin and Borodyanka have been heavily damaged by the war. In a post on Twitter, the official extended his gratitude to both Tesla and Elon Musk for their continuous support of Ukraine.

“Tesla Powerwall tech will power up to two ambulant clinics in Irpin and Borodyanka. New solar panels and integrated battery systems will not only use renewable energy but also store it for backup protection. We are grateful to @Tesla and @elonmusk for this continuous support,” Fedorov wrote.

Tesla Powerwall tech will power up two ambulant clinics in Irpin and Borodyanka. New solar panels and integrated battery systems will not only use renewable energy, but also store it for backup protection. We are grateful to @Tesla and @elonmusk for this continuous support. pic.twitter.com/7MYvCPA1yB

Tesla Powerwalls have a storage capacity of 13.5 kWh per unit, which should make them invaluable for the clinics in Irpin and Borodyanka. With the battery storage units working together with solar panels, the medical facilities would likely be able to have enough energy to keep their lights on around the clock.

Elon Musk has been quite involved in supporting Ukraine in recent months, though it was his private space company, SpaceX, which has been providing most of the help to the war-ravaged country. Musk’s help came mostly in the form of Starlink terminals, which allowed Ukraine to stay connected to the internet despite Russia’s attempt to cut the country off from the World Wide Web.

In a statement last month, Fedorov stated that Ukrainians utilize thousands of Starlink terminals every day. He also noted that the quality of Starlink’s internet connection has been excellent so far. Previous reports further estimate that there are about 5,000 active Starlink terminals in Ukraine today. The ongoing conflict in Ukraine has shown the world harrowing images and videos of the war. But amidst this, photos have also been shared online that show just how resilient people are. Some of these images were shared on social media platforms recently by electric vehicle advocate Bogdan Golovatiuk, who is currently in Kyiv, Ukraine. According to Golovatiuk, electric cars have become indispensable in the Ukrainian capital. Since fuel is scarce, EVs have become an ideal form of transportation. Teslas in particular, due to their features such as Camp Mode, have “become a home for many.”