Tesla is showcasing Cybertruck often in recent times. Recently the electric pickup was seen at the CVPR in New Orleans. Earlier the company showcased the prototypes to International Speedway’s FOrmula FAE event. However, now the original Cybertruck prototype was showcased in New Orleans. 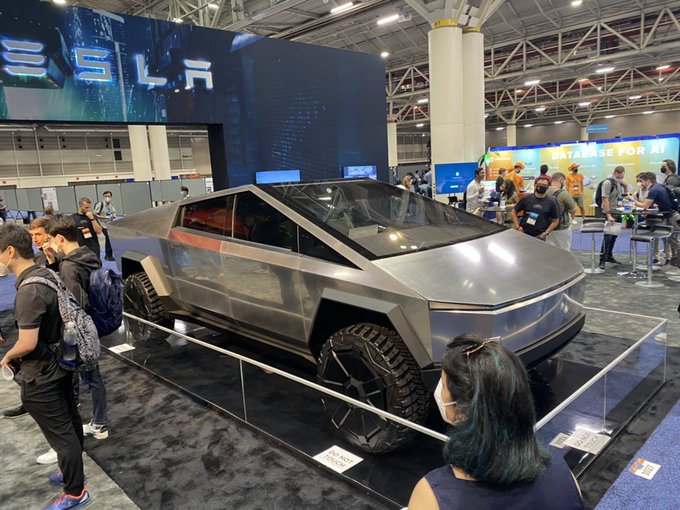 In the company’s booth, Tesla’s Director of Autopilot Software Ashok Elluswamy was present. He shared a picture of the Cybertruck in the booth on social media. Many members of the Autopilot team and some engineers were stopped at the location. It is similar to Cybertruck’s earlier spotting, attracting a lot of attendees to have a look at the prototype.

The Tesla Autopilot team is at CVPR this year! If you are in New Orleans, do stop by the booth, talk to the engineers & checkout the Cyber. pic.twitter.com/ni3qpOUaKa

The features from the original Cybertruck seem to be slightly different. Compared with earlier versions, the vehicle has door handles, the tires don’t have aero covers. Furthermore, there are no side mirrors or physical wipers. The interior is fully finished and the dashboard is made of paper composite. Additionally, certain components like the dashboard seem to be changed/updated.

The CVPR 2022 is to be the “largest gathering of professionals from across the world and from every aspect of the computer vision, machine learning and artificial intelligence industry,” As noted by the official website. Besides Tesla Cybertruck various other technologies are also showcased at the event.

Wow, Tesla brought the CyberTruck to #cvpr2022. It’s as big as it looks. pic.twitter.com/NbjOa3HWk2

Looking at the floor plan of the exhibitors at CVPR 2022 shows that Tesla’s booth is one of the biggest at the event. Tesla is joined by other companies noted for their AI programs, such as Apple, Meta, Microsoft, and TikTok, as well as autonomous driving companies like Argo AI and Zoox.

Tesla’s participation at the prolific AI conference highlights a point that Elon Musk has been emphasizing for some time now. Musk has noted that while Tesla today is mainly known for its premium electric cars, the company will be known more as an AI robotics company in the future. This, according to the CEO, is because Tesla is currently “developing one of the strongest hardware and software AI teams in the world.”

Unlike regular showcasing areas, the place is for people really into AI and other technological advancements. As stated “CVPR is the largest and best-attended conference for the computer vision and pattern recognition. 91% of the CVPR attendees indicate they find value attending the CVPR Expo.” Around 48% of the attendees are expected to be from the industry. And around 63% of the attendees are from Research/Education backgrounds. Some people have already observed the earlier Cybertruck prototype and see certain notable changes in the one showcased at the event.