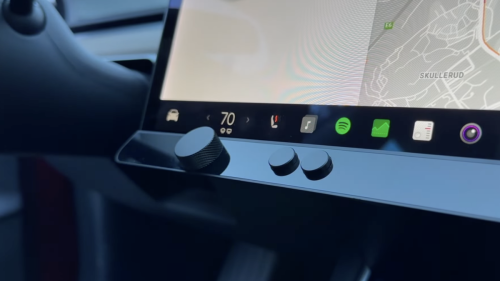 Tesla is known for its touchscreen-based user interface. Tesla vehicles are finally going to get buttons and physical inputs, which is possible with its new smart accessory. Tesla doesn’t have the best user interface, however, they are always making improvements.

It is to be noted that Tesla is miles ahead of other automakers; as such, most of them are now offloading most of the experience to Apple and Android because of it. However, if there’s a main complaint about Tesla’s in-car user interface, it’s the lack of physical input. Literally, everything goes through touchscreens or voice commands, aside from a few buttons and scrolls on the steering wheel. While many owners don’t mind, it has been a recurring complaint for people who prefer physical buttons and knobs, especially for things like volume and climate controls. The new product is being crowdfunded on Indiegogo. It’s a neat little accessory called Ctrl-Bar, and it sticks to the bottom of the Model 3/Y’s center display.

The knobs can be used to change the temperature, and the four center buttons can be programmed to do a bunch of different things. The crowdfunding campaign describes the product, “The two scroll wheels with tactile indents give the driver and passenger complete control of the cabin temperature. Four push buttons ensure easy access to programmable shortcuts. All changes done on Ctrl-Bar are reflected on the center screen!” The product is easy to install. It doesn’t require any hardwiring to Tesla’s systems. One has to plug it into a USB port to power it, and the controls affect Tesla’s settings through the Tesla API – meaning that they can have the buttons do anything that can be done through the Tesla app.

The company is also trying to bring some more advanced features like speed trap warnings. “Speed trap warnings will also be available through a subscription. Ctrl-Bar will check for nearby fixed speed traps and visually alert you when you’re approaching. If you somehow are above the speed limit (the warning threshold will be configurable), Ctrl-Bar will give an audible warning reminding you to slow down 🙂 *Will be available through a subscription.” The company is even planning to have over-the-air update capability for releasing additional features in the future. As with any crowdfunding product, it comes with a certain amount of risk. The Ctrl-Bar starts at €199 EUR (approximately $220) for the first 75 units, and then the price gradually increases. The company plans to start deliveries in the summer.