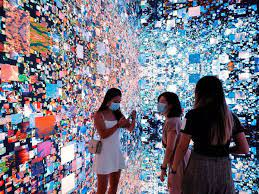 The Chinese are investing heavily in the metaverse

Beijing Language and Culture University announced its list of the top 10 online buzzwords for 2021 in the first week of December, and the website Yaowen Jiaozi released its own top 10 buzzwords for the year in the first week of December. Both lists included “metaverse,” which was the only non-Chinese term on the Yaowen Jiaozi list. This signifies that the Chinese are investing heavily in the metaverse.

China has registered over 7,000 trademarks connected to the metaverse, according to business data site Tianyancha. A-level gamers have now poured money into the metaverse, causing a gold rush and boosting metaverse-concept stocks.

Hillhouse Capital, Zhen Fund, Wuyuan Capital, Evergreen, Morningside, and Xinghan Capital have all begun to construct their metaverse roadmaps, which include portfolio investments ranging from virtual social networks and virtual idols to game firms and VR/AR initiatives in the primary market. Luo Yonghao, a Chinese entrepreneur and internet celebrity, has claimed that his next business venture will be in the metaverse.

According to Tianyancha, the number of trademark applications with “metaverse” in the name has surpassed 7,000 as of December 9. More than 1,000 companies have trademarks linked to the metaverse. It’s also worth noting that 99 percent of metaverse trademarks were filed in 2021, with the majority of them occurring in the latter two months. Only 130 companies applied before September 22 of this year; by October 22, the number had risen to almost 400.

According to the distribution of registered cities for metaverse-related trademarks, Beijing came in first with 810, followed by Guangzhou with 637, Shenzhen with 519, and Shanghai with 419.

Facebook, the world’s most popular social media platform, has changed its name to Meta. Microsoft released Mesh for Teams, which allows groups to establish their own metaverses; Google, with its rebuilt Google Labs, is also relying on the metaverse. Adidas and Nike are chasing metaverse hype: Adidas purchased a Bored Ape NFT and is planning metaverse cooperation with Yuga Labs, while Nike purchased NFT sneaker studio RTFKT.

Sequoia Capital signaled a shift in focus by updating its Twitter bio to this sentence, which is full of crypto jargon:  “We help the daring build legendary DAOs from idea to token airdrops.”