Seoul to be the world’s first major metropolitan government to join the metaverse. The South Korean capital unveiled a plan on Nov. 3 to make a variety of public services and cultural events available in the metaverse, a virtual reality-based immersive internet. 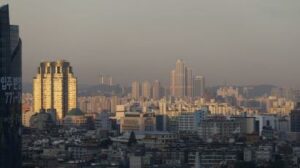 If the proposal succeeds, Seoul citizens would be able to use virtual reality goggles to visit a virtual city hall to do everything from a tour of a historic site to filing a civil complaint.

The investment of 3.9 billion won ($3.3 million) is part of Mayor Oh Se-hoon’s 10-year strategy for the city, which aims to increase social mobility among inhabitants while also increasing the city’s worldwide competitiveness.

It also takes advantage of South Korea’s Digital New Deal, a government initiative to leverage digital and AI tools to improve healthcare, central infrastructure, and the economy as the country recovers from the effects of Covid-19.

By the end of 2022, Seoul’s metropolitan administration will have developed its metaverse platform. It will house a virtual mayor’s office, as well as rooms for the business sector, a fintech incubator, and a public investment organization when it is completely operational in 2026.

This December, the platform will debut with a virtual new year’s bell-ringing event. The city wants to open the “Metaverse 120 Center” in 2023, a virtual public service center where avatars will handle citizen complaints that previously could only be addressed by physically visiting city hall.

The plan provides little information about what devices citizens will use to access the metaverse platform so far, however city officials stress that the goal is to increase access to public city services regardless of geography or disability.

However, for many people, specialist equipment may be a hindrance. Virtual reality headsets are still expensive, cost between $300 and $600, and are not as common as smartphones and PCs.

As part of the “smart cities” concept, local governments are utilizing digital technologies and real-time data to improve city operations. The metaverse could be the next step in its development. Even for the companies trying to build the metaverse, the details of how it will work are still hazy, but it’s a natural next step for Seoul.

Artificial intelligence will be used to monitor the city’s sewers and water waste depots in South Korea. An AI chatbot acts as a public concierge, answering queries and complaints from the public about everything from parking violations to covid-19 protocols.

Seoul announced plans for a public internet of things network earlier this year, which would consist of a network of sensors and base stations spread across the city that would collect data on things like traffic, public safety, and environmental metrics and feed it into a central operations platform run by city workers.

Companies are virtually solely responsible for the metaverse’s future development. Microsoft, Nike, and Meta, the parent company of Facebook, are all claiming digital real estate. South Korea is one of the few countries that is seeking to recreate a virtual public square. However, if they succeed, the metaverse’s utility might be extended to millions of citizens who would otherwise be excluded.