The first autonomous ship to set sail, thanks to AI

Artificial intelligence has always been nourishment to the curious nature of humans, opening new doors of knowledge and newer domains to explore. And now, with the backing of artificial intelligence, the very first autonomous ship is all set to sail into the pages of history. 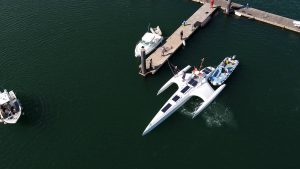 The world’s very first intelligent ship goes by the name “Mayflower 400.” It will enhance the study of the ocean depths increasing the scope and possibilities. The ship halts its engines in Plymouth sound and then self-activates a hydrophone to listen to whales. 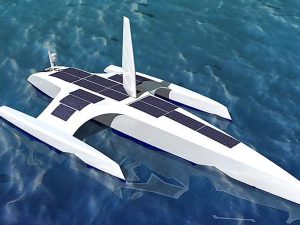 On the course of its voyage, the vessel will facilitate the in-depth study, monitoring, and tracking of aquatic life, in addition to studying marine pollution, and analyzing the levels of plastic in the ocean water. The wealth of knowledge gained through this will be of substantial help in understanding the deep mysteries of the ocean, equipping us better to build and develop on that knowledge.

The world still holds mysteries that are to be unveiled, and if the studies are accurate, about eighty percent of the underwater world is still veiled by mystery. According to Mr.Brett Phaneuf, the brain behind the Mayflower project, the global climate is influenced a great deal by the ocean and it exerts “the most powerful force.”

One of the major challenges when it comes to the study of the underwater world is the limitations posed by the rash and tough nature of the sea. While onboard, the sailors may fall sick, or a storm might strike them down, or any kind of climatic anomalies can pose a serious threat to the people onboard. This is where the advantage of an unmanned ship comes forth. The area to be explored is increased threefold by a ship without people, allowing the scientists to delve deeper into the depths that hold a lot of answers and even more questions.

The success of the Mayflower project is the result of a collective effort. The project includes contributions and support from a multitude of service providers, and individuals from various nations like India, the United States, and Switzerland. Thanks to this “global effort,” the cost of the project which would have been extremely high was reduced to an affordable US$1 million.

The vessel is covered by solar panels, and its construction took over a year. If the situation is favorable., the ship will set sail on the 15th of May. The data gathered by this non-profit venture will be made available free of charge and it can prove to be of remarkable help in steering the future of commercial shipping in the right direction.

The onboard artificial intelligence, which is the smart captain of the ship is an effort that took over a year to develop. The computer had to analyze thousands of photographs to reach a capability where it can effectively identify possible maritime obstacles. In addition to this, the vessel also went to sea for “supervised learning.”

Running a multitude of potential scenarios will help the vessel to discern what is good, bad, safe, or unsafe and act accordingly. In case of an error, this will enable the boat to correct itself and then learn. To facilitate this continuous learning, Mayflower 400 uses a sophisticated system that includes six cameras and radar.