The Ladder to Success! 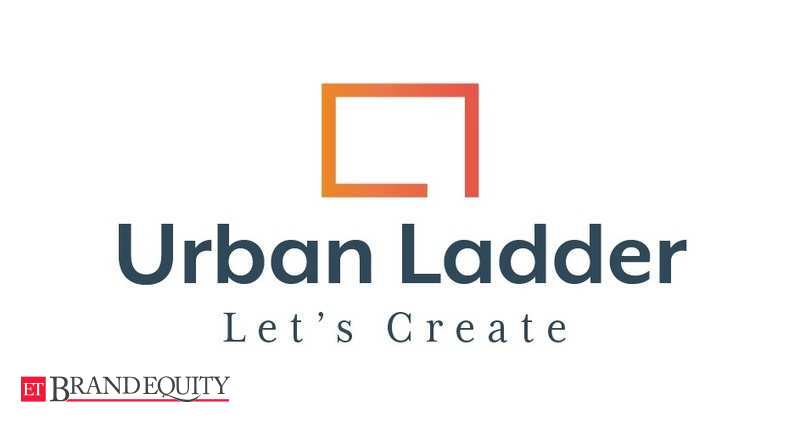 The unconventional style of buying furniture has a twist now. I remember since childhood furniture shopping was a “days” effort but now all that is a click away!

Urban Ladder is an omnichannel furniture and decor retailer based out of Bangalore, India. Urban Ladder currently has 3 stores in Bangalore and distribution across 75+ cities in India through its website. 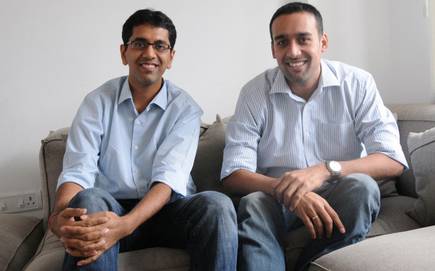 Founded in February 2012 by IIM-Bangalore graduates Ashish Goel and Rajiv Srivatsa, the company raised around $120 Mn from top venture capital funds such as Sequoia Capital, SAIF Partners, Kalaari Capital, Ratan Tata’s VC fund, and a hedge fund called Steadview Capital. The company closed its Series E round two years ago but struggled to get funding after that. In November 2019, it managed to raise INR 15 Cr although some of its existing investors did not participate in the round.

In fact, the furniture e-retailer went through a sticky patch throughout 2019. Several cracks started to appear in the firm’s business, including layoffs, and the exit of its co-founder Rajiv Srivatsa. In October last year, just months before a devastating pandemic swept the world, Srivatsa said in a press statement that his eight-year journey with Urban Ladder would come to an end. His exit came a day after Kalaari Capital’s Vani Kola resigned from the board of the company.

The financials and the change in post-money valuations over the years would further explain the scenario. For any startup, surviving during the first year is the hardest thing. When Urban Ladder was founded by Ashish Goel and Rajiv Srivatsa in the year 2012, there was no clear platform for people who wanted to shop online for furniture. When the two were renting flats next to one another in Bengaluru is when they realized the pain of buying furniture online. After sleeping on the floor for almost 15 months, Goel and Srivatsa realized what the internet lacked was the ability to buy furniture online.

With an initial investment of $ 1 million from Kalaari Capital in May 2012, Urban Ladder was launched. While the primary need was for aesthetically appealing furniture, the secondary need was for affordable furniture. Realizing this gap, the two founders used the first round of investment to strengthen their team, build their customer service, and increase the kind of products available on their website.

“As a small team, we were more agile about our processes. Systems were quite rudimentary too. We needed a solid front end experience so that customers could get a good sense of the product and complete their payment. We took a call that features like ‘My Account’, and more advanced features that are standard for most eCommerce sites, were not initially prioritized,” says Rajiv.

Urban Ladder received its first funding from Kalaari Capital in May 2012. Kalaari Capital invested 1 million dollars immediately after that Ashish and Rajive launched their first venture in July 2012, Urbanladder.com.

Since then Urban Ladder has managed to raise 92 million dollars in the Series of 5 rounds from 8 different investors.

Series B: In this round Urban Ladder raised 21 million dollars from existing investors Kalaari Capital and SAIF Partners and Steadview Capital.

In the latest round of funding held in February 2017, they raised 1.02 billion dollars from ABG Capital and other existing investors.

Obstacles needs to be faced

Inertia to Change: While many have taken to buying clothes/trinkets online most people (even in cities) still are not convinced with the idea of buying furniture online. There is the fear of damaged pieces, the difficulty of return, and the feeling that the pictures are not accurate that inhibits them.
Ticket Size: Unlike clothes a table/cupboard cost above Rs10000/-. The ticket size itself is a discouragement for people to purchase furniture online.
Local Vendors: Most cities have furniture market hubs (Like Kirti Nagar in Delhi) that have a large variety and offer cheaper bargains. many choose to flock to these places instead of buying online.
Parallel Industry Focus: To run an online shop, the company has to acquire expertise or partner with 3rd party vendors for successful/seamless operations. This includes Delivery, online customer support/complaints, IT set up for site support, Online Marketing, Social Media, Logistics for returns, etc. This is expensive and requires heavy capital investments.
Urban Focus: Online Furniture concepts are flying in the urban setup, especially where the corporate sector is booming like Mumbai, Bangalore, Gurgaon. However 2nd and 3rd tier cities where online shopping has become popular, this is yet to completely break-in.
Price Sensitivity: Due to high overheads, online furniture companies have not been able to pass on discounts to customers. There is almost a 10–15% gap between online and shop price. India is an extremely price-sensitive market
Competition: Online Furniture is also now a crowded space with the likes of – Pepper Fry, Urban Ladder, LivSpace, FabFurniture, Home Lane, Housefull, Durian, Snapdeal, Flipkart, and many others joining in.
Experiential Buying: Setting up the house also is an experience that people like to enjoy. This includes going shop to shop, exploring pieces that showcase Indian craftsmanship, identifying unique & preferable single pieces. Online furniture shops are providing furniture as a utility and are generally mass manufacturers.
Last a Lifetime (Investment): People in India continue to see furniture as something that should last a lifetime. Hence there is a focus on solid wood, minimum use of ply / fabricated wood. Buyers like to check and verify this before investing in furniture. 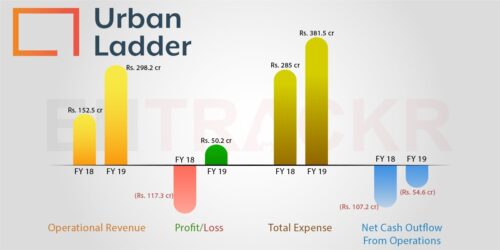 Urban Ladder has both online and offline business model for distribution. The company delivers and installs all the products it offers. The brand has also put its products on marketplaces Amazon and Flipkart. 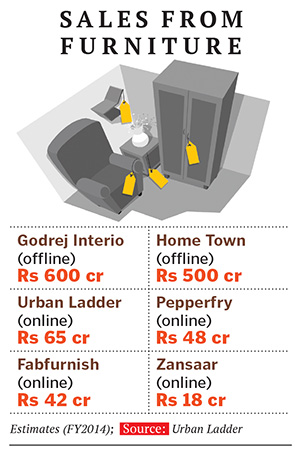 “It took us one month to get the artwork right. Some websites which blindly followed us ended up making ghosts,” laughs Ashish Goel, CEO and co-founder, Urban Ladder Goel’s jeers underline the cut-throat competition in the online furniture market where every small move by one player is forcing others to follow suit.

The online furniture market got off the ground in January 2012 with the launch of Pepperfry. About two months later, FabFurnish started and later, Urban Ladder joined the fray. Over the past three years, Pepperfry and Urban Ladder have clearly emerged as frontrunners in the race of seven players. Pepperfry has taken a clear lead in terms of setting up its own logistics network and product catalogue. Urban Ladder, though, has more funding and has clocked revenues that are almost twice of Pepperfry’s revenues last year.

Urban Ladder boasts the highest funding among its peers. It has got some $78 million, and a personal investment from Ratan Tata, Chairman Emeritus of Tata Sons. In fact, the investment by Tata is seen as the biggest breakthrough for the company. “It’s recognition of what we are doing,” says Goel. In comparison, FabFurnish has been going slow with just about $30 million of funding available, a tad better than Pepperfry’s $28 million.

Furniture is a long tail business. For instance, buying a mobile is different from a sofa. Before making a purchase, the consumer is more or less sure about the phone model (Apple iPhone or Samsung Galaxy S6) to buy.

Urban Ladder has won several national and international awards since its inception few of those awards are.