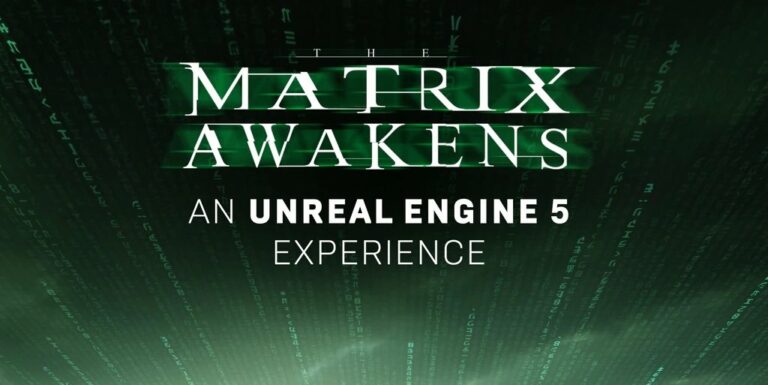 The Matrix Awakens was available for download on Monday, but the full version will be unveiled and available to play starting December 9th after its appearance at The Game Awards. Unsurprisingly, the Matrix Awakening Demo will only be available on PS5 and Xbox Series X / S, as current generation consoles are likely to be the best platforms to experience what Unreal Engine 5 with updated graphics can do. The 29GB tech demo may already be preinstalled on consoles and will launch on December 9th during The Game Awards.

We don’t exactly know what the experience will entail, but one thing is confirmed Keanu Reeves and Carrie-Anne Moss will in fact appear, reprising the live-action roles of Neo and Trinity. The fourth installment of the Matrix film series will be released later this month. A new trailer for The Matrix Resurrection was released last week and has certainly created a buzz for the film. This interaction with Unreal Engine 5 will also coincide with the premiere of the next film, The Matrix of Resurrection, starring Keanu Reeves and Carrie-Anne Moss as Neo and Trinity, respectively.

A new tech demo titled “The Matrix Awakens” has appeared on the official PlayStation and Xbox stores and is labeled “Unreal Engine 5 Experience”. If you don’t own a PlayStation 5 or Xbox Series X / S, you won’t be able to try out a new tech demo of Unreal Engine 5, which is available for preload on consoles now but won’t be released on PC, PC Gamer spokesman confirmed from Epic Games.

Unfortunately, apart from this surreal demo, no new Matrix games have been announced to accompany the film, but that doesn’t mean we’ll ever get our legacy back. Optimists are probably counting on the fact that the Matrix games, which no doubt have been underestimated, may someday return. In the meantime, people have to wait for the announcement of Epic Games, a detailed opening of which will take place in early December for all players and fans.

Anyone with a PS5 or Xbox Series X | S can see The Matrix Awakens available on the PlayStation and Xbox stores right now, and it can be downloaded as 29GB on both console platforms. It won’t be available until December 9th after it is officially unveiled during The Game Awards. The plot calls it “A wild ride in the reality-warping Matrix universe.” It was created with the help of members of the original film crew, including director Lana Wachowski. Crew members, including director Lana Wachowski, worked with Epic Games and partners to create The Matrix Awakening. The technical demo shop list not only promises Reeves’ performance but also Carrie-Anne Moss, who plays the Trinity in the franchise.

The appearance of Reeves in the 15-second trailer also previewed the authenticity of CG images made with Unreal Engine 5. Soon after the preload aired, Unreal Engine released a trailer on its YouTube channel but did not show it. However, the stripes in the ad image, part of the Keanu Reeves trailer, showed a model that looked very realistic. The initial leak only mentioned the appearance of The Matrix Awakens for the PlayStation 5, but the trailer also pointed out that it will also be available on the Xbox Series X/S.

Unreal Engine 5 is the next-gen game engine that will be used to create upcoming AAA titles it has the ability to create incredible picture quality, and game detail with photorealistic lighting for next-generation of consoles like the Xbox Series X / S and PS5. Epic Games unveiled its Unreal Engine 5 last year with an impressive technical demo of PlayStation 5. This upcoming tech demo is a Matrix-themed commercial for Epic’s new software, Unreal Engine 5, which has limited early access and will launch in 2022.

Epic Games has a card on its chest ahead of this week’s The Game Awards event. It’s worth mentioning that this is not a full-fledged game, but a demo to show what the PS5 is when the Xbox X series Console works when pushed to its limits. Preloading is possible on consoles, but it won’t launch on PC, video game publisher Epic confirmed to PC Gamer. Keanu is fully digital and because of Unreal Engine 5, Epic Games will also be featured in the upcoming Matrix Resurrections feature.

In 2003, Shiny Entertainment and Atari released Enter the Matrix for the PlayStation 2, Xbox, and Nintendo GameCube. The actual gameplay of entering the Matrix received mixed reviews, but its storytelling and live-action sequences set a new level for movie-based games. After all, Matrix Online was supposed to make PC gamers the successor to the Matrix story.

Although “The Matrix” is a movie franchise about the meta-universe, the surreal experience of its game and engine 5 will be an experience of the virtual world. The idea of an interactive video game related to The Matrix Resurrections should be familiar to long-term fans of the series. It now looks like the series will include games and interactive environments to create buzz around upcoming movies. It now appears that the series is embracing the interactive nature of games and environments to create buzz around upcoming movies.

The most optimistic of them will probably rely on this as a sign that someday we may see the return of the Matrix games, which have undoubtedly been underestimated. I’m not expecting something as important as showing off the horrors of Kojima PT – to some extent it will be an advertisement for The Matrix Resurrections – however, you don’t know that at all, and it’s a little overwhelming that this “worldview” is the Way forward for interactive, the narrative won’t be on PC, given how strongly each PC is tied to The Matrix and the Unreal Engine. If there were a tethered video game, one would imagine it would have been announced early and at least a month before the movie’s release.

The experience is now available for pre-order and download for the PlayStation 5 and Xbox Series S and X platforms ahead of the actual release date at The Game Awards. The Game Awards will be streamed live at the Microsoft Theater on Thursday, December 9, 2021. Game Awards founder Jeff Keighley expects 40-50 games to be showcased at this year’s event in some form or another. declared as a two-digit number. This will be the first rally in a couple of years, given the enforced global pandemic at last year’s online event.