The saga of a dramatic fall from grace of Theranos founder Elizabeth Holmes attracts worldwide attention.

The case of Elizabeth Holmes is one that is a rare example of how life can resemble movies every once in a while. Once a celebrated personality, applauded for her success, Holmes is now under the scrutiny of the masses, awaiting criminal trial and if found guilty, it would mean a long 20 years in prison. 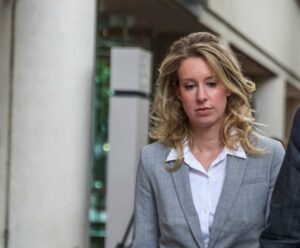 Elizabeth Holmes came to the spotlight in the 2000s with the brilliant success of her self-made startup, Theranos. With the success that unleashed revolutionary echoes, it was widely accepted and expected that Holmes was about to create a story of her own that will leave an indelible mark. She did create a story, and it has definitely left an indelible mark. The only question is whether it is a mark or stain.

A brilliant student since her school days, Holmes made it to Stanford, only to drop out in the year 2004, to pursue her dream (with the present context, there might be a chance of people replacing the word ‘dream’ with ‘agenda’). At the age of nineteen, she embarked on her journey which resulted in the creation of the much-celebrated and later criticized company, Theranos. Her milestone blood-testing system held a lot of promise and potential and quite unsurprisingly, it attracted a swarm of top-notch investors. Soon enough she was hailed as a perfect example of a self-made success story with some even comparing her to Steve Jobs(her usual turtlenecks might have contributed to that among many other things).

Theranos stood out from the other biotech companies as it brought forth a new dimension for blood testing that required only a few drops of blood, in comparison to the other technologies used for blood-testing. Soon enough, Elizabeth Holmes became a media favorite and began to grace the covers of famous magazines. Forbes, Fortune, New York Times Style to mention a few. The story was going smoothly with all the elements of the plot working up to her favor until 2016. The plot twist came with a set of investigative pieces published in the Wall Street Journal around 2016 that revealed shocking details and revealed a villanous face that was too blurry to be noticed amidst the praise and grace. And there starts the dramatic “beginning of the end.”

It was quite a bit of shock when someone named the youngest self-made billionaire by Forbes a year before soon came under the eye of suspicion and scrutiny. Around 2015, there were questions pointed at the company concerning the accuracy of its blood-testing system. The suspicions became all the more pronounced with a report from the Wall Street Journal which stated that the main product of the company handled only a small fraction of the 240 blood tests it advertised. Adding to the impact of this report was another revelation that the company was in fact using traditional technology to carry out a good majority of the tests.

The very first complaint about the company that opened a can of worms was by Tyler Schultz in 2015. Tyler Schultz was the grandson of George Schultz, a board member. Theranos was thus reported to the public health lab of New York state. Soon enough, there was a withdrawal of investments and partnerships and an eventual fall from glory. An earlier celebrated partnership with Walgreens soon came to an end, with the former drawing shutters on the 40 testing centers in California and Arizona. In addition to this, civil securities fraud charges were filed against the company by the Securities and Exchange Commission in the year 2018. Following the criminal charges filed against Holmes and Ramesh Balwani (Theranos executive) by federal prosecutors, the company faced dissolution in the year 2018.

The story is so dramatic that it gave rise to a book, a film, a podcast, an HBO documentary, and even a Hulu limited series. Talk about getting popular for all the wrong reasons. Adding to the drama was the fact that both Holmes and Balwani kept out of the public eye their romantic relationship. If convicted, both of them will have to spend twenty years in prison. Seems like the story was more of a crime thriller than a typical story of success. As the criminal trial is set to commence on Tuesday, Holmes and Eranos have once again come to the spotlight. It has also brought forth a swarm of sharp questions from people worldwide who are quite indignant about the fact that despite being charged in 2018, the trial took about three long years to come to fruition. Another question is regarding the fact that a massive fraud of such magnitude came forth through investigative journalism. With all these questions looming, the trial is looked upon with a lot of anticipation, the tremors of which are quite evident on Twitter.

It’s no coincidence that one of the most fraudulent companies this millennium, Elizabeth Holmes’ Theranos, had a Board comprised of mostly senior American military and state department officials.

Good thing we don’t rely on them to oversee trillions and our national securi- oh. pic.twitter.com/FOJpX7UORE

She has definitely got the makings of a super-villain. They say it takes some nerve to stand unfazed in the wake of such allegations. Looks like Holmes has got that.

Elizabeth Holmes, on trial for her Theranos swindle, has entered a plea of "Hoping To Be Played By Jennifer Lawrence, Amy Adams or Amanda Seyfried." The DA offered her Paris Hilton or Kayleigh McEnany but she said no, insisting "I'm a much bigger criminal than that" pic.twitter.com/o1mdoAq4TK

a thread breaking down how we got here and why Holmes is staring down the possibility of 20 years in prison pic.twitter.com/98XyLfAU6z

There begins the fall from grace. As it goes in every good play, it is always the hamartia.

Elizabeth Holmes has arrived for the start of jury selection in San Jose. If convicted, the Theranos founder could face 20 years in prison. pic.twitter.com/QBjaVsAEyS

As the trial of Theranos boss Elizabeth Holmes begins for alleged fraud, the usual questions need to be asked:
What were the non-exec directors, accountants, external/internal auditors, lawyers, analysts, regulators and sundry advisers were up to?https://t.co/PlFG8LiCw3

Looks like there are more plot twists on the way.