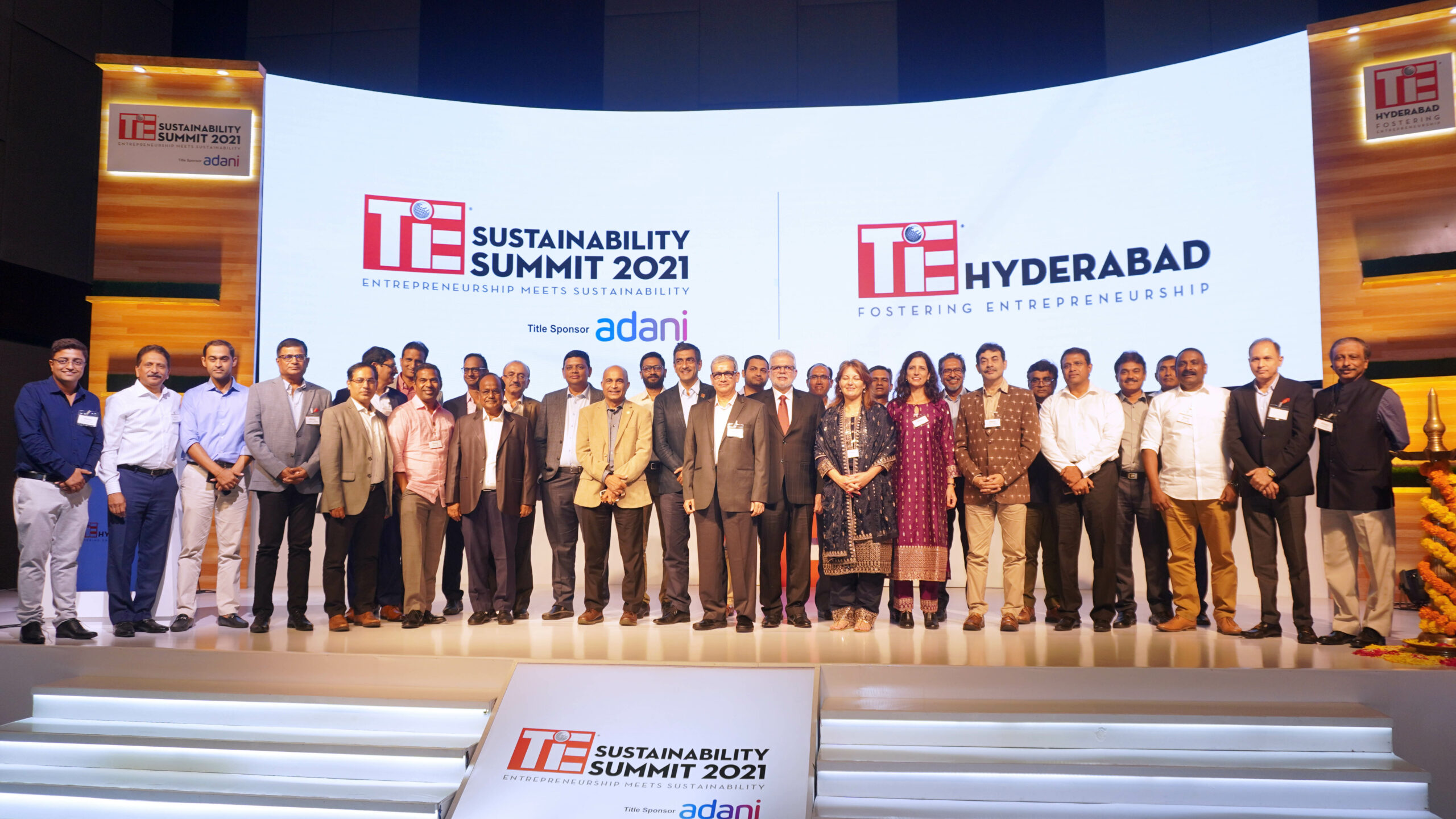 As of the inaugural time it had received a record number of 40,000 registrations from social enterprises across 55 countries and 5 continents. It is being hosted by TiE Hyderabad, the most recognized chapter worldwide.

Addressing the gathering Mr. Jayesh Ranjan said, the Telangana state, just being 7 years old, demonstrated in umpteen domains how sustainability can be achieved. He has listed out various measures and initiatives taken up by the state since its formation. From the days of drought prone to neglected agriculture to outbound migrations to depleting forests, diminishing groundwater levels, power holidays, the state has been doing very well on many fronts that is because of a clear vision of sustainable Telangana.

The official highlighted the government’s ambitious programs such as haritha haram in greening the state and Mission Kakatiya reviving 47000 lakes in the state. He also highlighted Telangana’s performance in the generation of renewable sources of energy, electric mobility by introducing a clear cut policy etc. All these decisions were made at foundation levels keeping principles of sustainability in mind. The state is futuristic in environmental management. That is the reason why the state could attract whose-is-who of the world to invest in the state.

Speaking further Mr. Jayesh added that Costa Rica and Israel, the partner countries of TiE Sustainability Summit, exemplified the best of Sustainable living. Costa Rica is the best in global environmental standards. Telangana state would like to explore oil farm cultivation in partnership with Costa Rica. We wish to emulate them, he said.

As an entrepreneur, I stay optimistic. I believe that the Covid 19 pandemic has forced us to find the will to kickstart a massive ESG-driven economic transformation. I am also confident that the most viable climate change solutions will be digital, and technology-driven — supported by policies that help accelerate adoption. My optimism comes from the realization that the impact of the pandemic would have been far more terrible had the digital technologies of today been absent. This should be an indication of the opportunity before us, Mr, Gautam Adani said.

I also believe, Mr. Adani added, that this convergence of sustainability and digitization will establish new disruptive business models that will create the next set of unicorns. This is where organizations like TiE become essential — they enable collaboration across entrepreneurs and investors who see opportunities wherever intersections and friction exist. And the only way we can reduce the friction that sustainability generates in today’s businesses is through the intersection with technology.

Speaking about India, Mr. Gautam Adani said, last year when I spoke here, I had said that over the next three decades India will become a 28 trillion dollar economy. It is now expected that by 2050, India’s per capita income will expand from about one-thirtieth of that of the United States to one-third of the latter’s per capita income. That is an astonishing rise.

Also, in 2050, the median age of 1.6 billion Indians will still be just 38 years. The world will never again see a middle class as large as the one India will have – and that at such a peak consuming age. In addition, the digital acceleration in India is just beginning and will create a tailwind not yet factored into the assumed 8% nominal growth rate. I fundamentally believe the Indian economy is still to hit its inflexion point of decades of double-digit growth. Therefore, I now think I may have understated my 2050 GDP projection of $28 trillion. Also, given the sheer growth in end consumption rates, I expect India to become the world’s top target destination for an immense quantum of FDI over this period, making the tailwind even stronger.

Let me discuss the specific opportunities around sustainability and drill down to where I see the biggest near-term possibility, Mr. Gautam Adani said. At the upcoming COP 26 summit in Glasgow in November, the world’s most powerful countries will lay the foundation for a series of global policy changes. I believe these will be transformational and will accelerate the economic opportunities arising out of the global effort to combat climate change. As technologies evolve rapidly, these opportunities will equate to trillions of dollars of investments he said.

Of all these technologies, today, solar is the fastest-growing source of power. Over the past decade, the price of solar panels has dropped by 90% and possibly over the next decade we will see price drops of the same magnitude as panels become even more efficient and new materials come into play. The fact is that the marginal cost of solar power is moving towards “zero” and this is both transformative and disruptive.

However, as always, it is the “combination” or “intersection” of technologies that create disruptive business models. The combination which I believe is a game-changing model for sustainability is that of solar generation and hydrogen production! It is fascinating that a pHoton can travel 90 million miles in 9 minutes to hit a piece of silicon on Earth. This in turn generates an electron to split an H2O molecule leading to the release of a proton — or what we call a Hydrogen atom — and now seen as the ultimate source of dense green energy. Our Earth receives enough photons every hour to meet our global energy needs for an entire year.

The ability of this almost “zero” cost electron to economically split an H2O molecule and create 100% green hydrogen in the future is a near certainty. Hydrogen is the trigger for the smarter use of other renewables by becoming the long-term transport and distributed storage solution for electricity. It is the key link in the energy transition journey that, along with wind and solar, will stabilize decentralized power generation. For India, decentralized power generation is a massive game-changer — especially for the rural population.

While these scenarios emerge, the Adani Group is not sitting still. We are tripling our solar power generation capacity over the next four years. This is a rate of growth currently unmatched by any other company anywhere on the planet. Our Renewables Portfolio has reached the initial target of 25GW a full four years ahead of schedule. Today, we are already the world’s largest solar power player. This puts us well on track to be the world’s largest renewable power generating company by 2030.

Also, over the next decade, we will invest over 20 billion dollars in renewable energy generation. Our overall organic and inorganic investments across the entire green energy value chain will range between 50 and 70 billion dollars. This will include investments with potential partners for electrolyzer manufacturing, backward integrations to secure the supply chain for our solar and wind generation businesses, and AI-based industrial cloud platforms.

We are confident that our integrated value chain, our scale, and our experience puts us on the road to be the producer of the least expensive green electron anywhere in the world. This advantage opens several new pathways for us including setting us up to be one of the largest green hydrogen producers in the world, thereby opening up additional possibilities to be a partner of choice for several other industrial businesses.

To wrap up his keynote he gave a message. A few research studies indicate that the Indus Valley civilization underwent a period of climate change about 4,000 years ago. The outcome then appears to be uncertain. However, today, we are aware of the effects of climate change and hence the outcome should not be uncertain. What we need is the will — and who better than “The Indus Entrepreneurs” to enable this will. The TiE platform is unmatched in scale, and it must take the responsibility to trigger a movement that brings together an ecosystem of entrepreneurs and investors that work together to build equitable solutions for a sustainable world.

H.E. Dr. Claudio Ansorena, Ambassador, Republic of Costa Rica said Costa Rica is the leader in Sustainable Environmental Issues. We are a small nation. India is 55 times bigger than you. But our shared values are common such as democracy, peace, sustainability, and the environment. We are proud partners for the summit and we will contribute as much as we can. We embarked on our journey of sustainability as early as 1970. 99% of energy consumption is renewable energy. Our forest cover rose from 26% in the 1980s and has now gone up to 59%. He has also listed out some of the most initiatives that Costa Rica launched in the pursuit of the sustainability goals.

The planet is heating up, glaciers are melting. Sea levels are increasing. We need a global attempt to save our planet. It is not the failure of the environment but the morals of the society, he said.

In a video message Nikki Haley, Former US Ambassador to the UN said private enterprises are capable of many solutions.

TiE Hyderabad and TiE Israel have entered in to a MoU to foster more business collaborations.

Welcoming the gathering Mr Manohar Reddy, Chair of TSS 2021 and President of TiE Hyderabad said Sustainability is the new oil and offers a lot of opportunities The summit has partnered with Israel and Costa Rica to build a better future. While the whole world is discussing sustainability, we have already started acting, he said. While explaining why this summit he said, we need to meet our needs of natural resources,  without compromising and affecting the needs of future generations. With that thought in mind the conference was conceptualized, Mr. Manohar Reddy explained.

Speaking on the occasion Mr. Mahaveer Pratap Sharma, Co-Chair of TSS 2021 said TiE is always ahead of its time. It has been working at the bottom pyramid of the chain. It has impacted the entrepreneurial ecosystem in the country. Mr. Suresh Raju, Conference Co-Chair of TSS 2021 we are trying our best through this summit to bring in the best possible entrepreneurial spirit into sustainability.

TiE announced TSS Social Enterprise Awards aimed at recognizing social enterprises worldwide. These awards will be a regular feature and will give on a concluding day. TiE, Hyderabad will be rolling out a $200 Mn to $300 Mn Social Impact Fund, he said.

The TSS Social Enterprise Awards supported by Adani Group will recognize social enterprises that are creating a deep and tangible impact on society, communities, animals, nature and the planet through innovative business processes and technologies while pursuing the sustainable development goals (SDGs) defined by United Nations including affordable and clean energy, agriculture, clean water and sanitation, climate change, education, healthcare, life on land, life underwater, livelihoods, poverty among others.

We are proud to have launched this initiative to recognize the thankless work by social enterprises and entrepreneurs who work towards the betterment of society, build innovative technology solutions, tread on the uncharted path to solve societal problems such as healthcare, water, livelihoods, poverty, education, agriculture etc. The TSS Social Enterprise Awards winners will be the future leaders of the country in the social impact space, added Mr. Manohar Reddy.

TiE also announced an initiative to give a fillip to Rural Innovations, they have also announced Rs. 15 crore grant money to support the initiative. A significant amount of this fund is already tied up Mr. Suresh Raju and Mr. Kaliprasad announced. These funds will be deployed in rural areas they added.