This pandemic, 300k New US jobs were created by iOS app economy 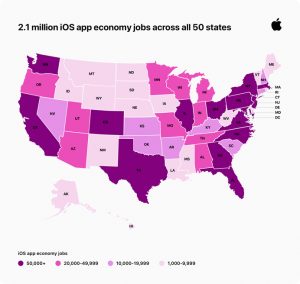 iOS app economy across all 50 US states

It’s common knowledge that the world economy has taken a huge hit amidst the pandemic since March 2020. However, this is not the case with Apple. The iOS app economy claims to have created about 300,000 new jobs in the US since April 2019 across all 50 states. The COVID-19 pandemic seems to have only boosted this streak instead of impeding it.

The Apple App Store launched in 2008 and since then it has been a part of the economy’s fastest-growing sectors. As of 2019, iOS apps supported 2.1 million jobs in the US. It saw a 15% increase from last year and as of now 2.7 million jobs are supported providing a huge arena of opportunities for Americans even during these times of extreme ambiguity and uncertainty.

As can be seen on the map as well, the app economy observed a massive growth of 30% by adding 36,000 new jobs in 2019. Other states such as Michigan, Nevada, Maryland, Alabama, and Oklahoma too saw a big increase in jobs during the same period of time.

Apps have become one of the most reliable mediums for people to literally do anything from connecting with people to editing to gaming and the list goes on. Apps have become a constant in every day lives of people worldwide. The iOS apps tirelessly provide such support to Americans by making remote access to services easy and convenient during a pandemic.

Along with providing jobs, Apple is also making many investments in learning and educational programs, especially for coding. There are programs like Everyone Can Code and Swift Playgrounds that provide learning and guidance to any person age not being a barrier to learn to code. Apple’s coding curricula are now being used by more than 100 community colleges in the US. In fact, even worldwide over 9k K-12 and higher education institutes are using this curriculum to teach their students how to code.

Apple doesn’t just provide coding lessons but it’s Entrepreneur Camps and accelerators provide people with a great opportunity to learn how to build apps with state-of-the-art technologies, make their businesses grow, and market them to the global audience in the best way possible.