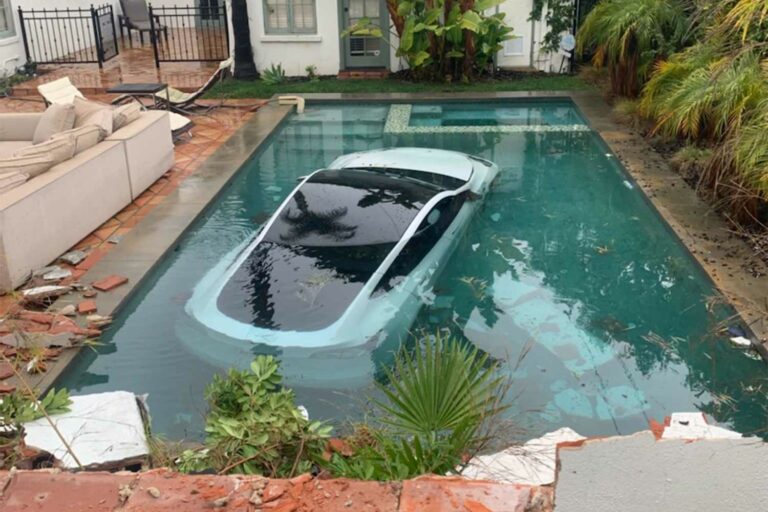 Pasadena Fire department shared a Tesla being submerged in the pool. It is located in the residence in the 700 block of West California. According to the statement given by the passengers, the driver apparently hit the accelerator instead of the brake. Then the vehicle went through the wall and into a pool. The staff members from the school jumped to help the passengers come out.

A heavy-duty crane hoisted the Tesla from the pool late Tuesday afternoon. One of the passengers included a child, according to the Pasadena Fire Department. Police and fire personnel responded to the incident within minutes, but none of the Tesla passengers were injured, Derderian said. The car was eventually towed out of the pool. “These preschool staffers are heroes in our eyes, because within just a few seconds, if not minutes after they rescued the occupants the car was submerged underwater,” Derderian said.

According to Insider’s report, three passengers were traveling in the car when the female driver accidentally hit the accelerator instead of the brake. This sent the car through the wall of a home on West California Boulevard. A resident was present inside the house but wasn’t aware of what was happening outside.

Personnel from the police and fire department responded within minutes at the scene, but the rescue had been completed, and no injuries were reported to the car’s occupants. The Tesla was later towed out of the pool.

PFD and PPD are on scene 700 blk. west California Blvd. A Tesla driver hit the accelerator instead of the brake, drove through a wall and into a pool. Three occupants in vehicle including a child. Good samaritans jumped into the pool and rescued the occupants. @PasadenaGov pic.twitter.com/euHlfLGfrz

Tesla designers, as well as owners, have always been proud of the electric vehicle’s ability to wade through water. One can find many videos on social media where the car has made it through flooded roads without a drop of water leaking into the interiors prompting CEO Elon Musk to call it “Boat Mode”. The car’s ability has been touted so much that Tesla is also considering it as a standard feature in its next offering, the Cybertruck.

However, it is different when the driver simply hits the accelerator instead of the brake. Perhaps there is more to the story where there is a kid and a grandmother present in the scene. Tesla vehicles are known to be much safer in various aspects. While people tend to believe vehicles electrocute you once they are in the water. However, it can be seen once again that it’s not the case. With some servicing, the vehicle will also be in the right condition to use for further driven by the owner.