TicketHungama – The Online Ticketing And Events Platform For NRIs !

The event ticketing market for Bollywood concerts, movies & plays in various Indian languages, and NRI community events is worth around $10 million annually in the US alone. Add up the masses of NRIs world over and that number just keeps climbing. In the year and a half since its inception, TicketHungama has already made a name for itself in the US market that ticket buyers and event organizers trust and respect.

TicketHungama.com is an online event marketing and ticketing platform that serves the NRI and South Asian communities in the US and Canada. While there are an innumerable amount of portals where one can obtain information about local events and a handful which actually sell those tickets, there isn’t a single event marketplace that caters specifically to NRIs or is focused on Bollywood and South Asian events abroad. That’s the void TicketHungama aims to fill.

TicketHungama began its operations in July 2014 with a handful of local events in the New York and New Jersey area and have since expanded to the whole of the US and some parts of Canada.

Events bring people together. That’s what is so great about them. By maintaining focus on a specific community of people who have a very specific taste and range of interests, TicketHungama is essentially a gateway for Indians living abroad to meet other Indians who enjoy the same music and food and culture as themselves.

While TicketHungama is trying to align with the major players in the online ticketing industry such as Eventbrite, they are not aimed at the niche demographic that TicketHungama is targeting, specifically NRIs and Indians traveling abroad. TicketHungama’s primary competitor then becomes sulekha.com, which has been the only outlet for NRIs in the USA for the last decade and a half. The biggest drawback with them, however, is that they are essentially yellow pages which sell tons of services, whether relevant or irrelevant to purchasing event tickets. This results in an unpleasant user experience and that’s what makes customers look for other avenues to fulfill their needs.

“I think our biggest strength is in our simplicity and focus. We cater to a targeted audience who come to us with a very specific need and we deliver accordingly. We don’t try to sell you real estate or piano lessons when you’re looking for Arijit Singh concert tickets” says SAMPURN ANAND, Co-founder at TicketHungama. There was a time when that worked for companies which would bombard you with news and weather and stock market updates and ads and sports scores and alerts and so on while you waded through all this to get to their main function – search. Then Google came along with its simple and to-the-point search bar. They got rid of all the clutter and basically revolutionized the way we use the internet and that’s exactly what ‘The Team’ is doing at TicketHungama.

ANAR ANAND, Co-founder at TicketHungama, adds that ‘Absolutely! Today people want everything specialized, customized, and compartmentalized. It’s better to be the best at something than mediocre at everything. We present ourselves as a full service event marketplace and that’s what we stick to’.

Another edge TicketHungama has on the competition is that it is an US based company which is where its biggest market is. Event organizers and ticket buyers alike have shown that they like to be able to speak to someone local, have a number they can call at any time, or expect a prompt response when they email.

The market has become disorganized and TicketHungama’s commitment to quality service seems to come as a breath of fresh air for customers. Anar also adds add ethics to be an advantage, which is often overlooked as strength. Team TicketHungama believes in being upfront and transparent in all dealings.

Anar also regards the name ‘TicketHungama’ as a strength. She builds that ‘It’s cute, to-the-point, there’s no confusion what the product is, and the ‘Desipana’ is built right in’!

Like a lot of the most successful teams in the business world,  Sampurn and his wife Anar co-founded TicketHungama. 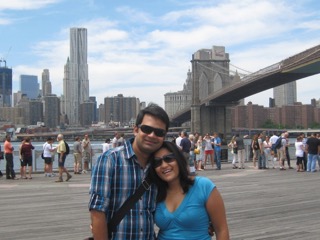 In the summer of 2014, an offer came to Anar and Sampurn through a business acquaintance to become an organizing partner in a Bollywood concert to be held in LA. Being so closely connected with Bollywood and the entertainment industry, both decided to take it up. For Anar and Sampurn, it was a really exciting venture that showed potential not only for that event but for future collaborations. Not having much knowledge about organizing a live event with an A-list artist, they went through the usual channels as per the other partners’ recommendations for marketing and promoting the concert. There was pretty much only one major company which would promote the event as well as manage all the ticketing. They were very South Asian centric, had a lot of traffic on their site, and their services fell well under our budget. It seemed like a good deal at the time to both. Turned out, you get what you pay for. The event was hardly marketed as promised. Ticket sales were dismal. Customer service was a disaster. All in all, they ended up having to cancel the event and even got stuck paying the costs for the venue and other vendors. The silver lining in the entire fiasco was that both realized exactly what this market needed and the potential in this arena. Marketing and promotion was their forte and what they lacked in technical expertise, they more than made up for it in the creative and sales departments. The other partners were gracious enough to take a chance and let them handle the ticketing and promotions for their next event and the rest as they say is history.

Anar is a screenwriter with a degree from New York University, who dreams of writing and directing Bollywood movies. Sampurn is a professionally trained chef and worked in the hotel industry before. “The journey from writing TV shows to becoming entrepreneurs has been the most exciting adventure of our lives. The success of the venture is icing on the cake” says Sampurn.

Response from the Customers

As an entrepreneur, you try not to tie too many hopes to a start-up, knowing full well the challenges you face and the players you’re up against. But the tremendous response that TicketHungama has received, not only from the Indian community but also Pakistani, Bangladeshi, Caribbean, and Indo-Guyanese communities… Anar and Sampurn are overwhelmed with it.

“We honestly could not have expected anything better. It seems as if people were ready for a service that they could trust and depend on and that’s what we have given them. We’re extremely grateful to those first few clients who took a chance on us and have been with us ever since” Anar comments.

This is something both Anar and Sampurn agreed upon and have maintained since the inception of this company – do not lose focus. It’s very tempting to keep adding to the scope of your business and make changes to the model based on what you perceive the market trends to be or what you competitors are doing. At TicketHungama, however, team is very clear on what their niche is and aims to make that product the best in its class. Keeping this in mind, they have laid out a realistic strategy to grow slowly and steadily into every market where Indians are over the next three years.

“Our daughter was born in September 2014, barely two months after we launched the company. Dealing with a newborn and a toddler while working out of a home offfice… I’d say that was one of the biggest challenges” Anar recalls.  Both were always super-conscious about maintaining a level of professionalism when dealing with clients so they would take turns.

The other big challenge was chasing after freelance programmers and web developers in the initial phase. They needed people who were as passionate about the product as both are, but when you’re just getting off the ground not many people believe in you so retaining dedicated and talented professionals becomes problematic. Both had even gone as far as to offer a stake in the company to first couple of collaborators.

Anar shares the learning of her journey by adding ‘A start-up business will hit you hard. There will be pressure from every side, anything that can go wrong will go wrong. You just have to believe in yourself and hold your ground.’ The other, most important, lesson like Anar mentioned before is to never get people on board just for the sake of it. You have to build a team with the right people, those who share your passion. Otherwise, you’ll just be carrying dead weight around and that will sink your business faster before you can even take off.

Sampurn adds that ‘you should be conscious of your work-life balance. It’s too easy to burn out and that doesn’t help anybody. As a husband and wife team, we complement each other very well’.

We are gearing up to launch in UK, India, and Australia over the course of the next one year. It’s going to be a herculean task given that both are not physically present in those countries, which was an advantage they enjoyed in the US.

TicketHungama aims to be present in every market world over where Indians live, work, and study within the next four years.

TicketHungama is more than just an idea and a business plan. It is a proven business model and both have independently brought the company to the point where TicketHungama is a popular name in the market and a force that even the competition reckons with. “We are poised to become the premier online event marketplace for NRIs and have a solid strategy moving forward. With the help of investors and venture capital, we will get there better and faster” Sampurn concludes.