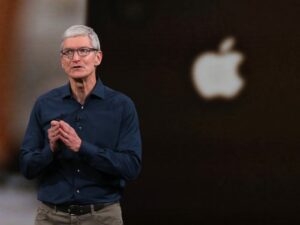 Apple chief Tim Cook supposedly received a pay package of $99 million in 2021. An advisory group consisting of powerful investors have summoned shareholders to vote against such a huge pay package which was paid to Cook.

The advisory firm, Institutional Shareholder Services (ISS) wrote a significant letter to the shareholders of the company. In the letter, they mentioned that there were crucial concerns in regards to the “design and magnitude of the equity award.” This award referred to the given to Tim Cook in 2021, half of which lacks “performance criteria,” added the letter.

The Institutional Shareholder Services planned to make recommendation for when the shareholders of the company would meet in the following month.

According to Forbes, Cook, aged 61, has a personal fortune worth $2.3 billion. Moreover, he has been an outspoken critic of inequality prevailing in social and economic fields. He has reportedly taken a pledge that before his death, he would give away all his fortune. Despite his reputation, investors still felt cheated at the vast disparity in the incomes between Cook’s and theirs.

Based on reports, Cook initially took home a salary of $3 million. Along with it, he received $82.3 million in stock awards. For hitting targets, he got $12 million and an additional $1.4 million for air travel, contributions for retirement plans, insurance premiums, along with other contributions.

‘Over the last year we often felt not just unheard, but at times actively ignored,’ the Apple employees wrote.

It was found that Cook’s pay was about be 1,447 times the pay received by the average employee working at Apple. This huge disparity was disclosed by a filing published in January this year.

Clearly, Apple has been one of those big companies to be merging victorious during the Covid-19 Pandemic. As opposed to other drowning businesses, its share price rose along as the pandemic forced workers online.

All this while, the company has managed to escape the collapses occurring in share prices. These collapses were faced by big tech giants such as Facebook-parent, Meta and Netflix. In January this year, Apple reported to hit an all-time revenue record of $123.9 billion, an 11% increase from 2020. It proved to be way higher than what even analysts had expected.

On the other hand, the CEO pay deals have resulted in the increasing unhappiness among the shareholders. However, the vote emerged from this issue regarding Cook’s pay is only advisory i.e, the board is not compelled to order an action on it.