Do You Want To Express Your Freedom Of Speech In A Democratic Way? It’s Time To Swipe !

“Right to freedom” and “Right against exploitation” two of the six Indian constitutional rights almost give way to “Right to freedom of speech against exploitation”. Exploitation and social issues have been prevailing in our nation for far too long, and with the advent of technology and social media, people tend to express them not just internally but internationally as well. But what happens to all the statuses you have put in favour of or against any social statement? Do likes and shares generated across these posts going to do any actual good for the affected? Or do you just swipe them off from your feed when a new issue arises?

For Akshat Jain and Anuj Goel the idea was ignited by the end of 2015 when the intolerance issue was viral across India. Modi said ‘technology should help, support and solve social issues’ and the founders were deeply worried about the intolerance trending which was being refueled by (social) media. They realised that there should be a tech platform that could help individuals express their opinions in a meaningful way and where these opinions should contribute to a concrete decision being made. Hence they decided that it is time to Swipe for a change !

The major focus of Swipe is to spread awareness on persistent issues. The swipe team believes that the common man’s voice has potential and it works to make the voice count. The application helps the consumer to learn, find & explore trending issues or topics, voice out his/her opinion on a given topic that interests them and participate in interesting discussions. Since its inception in April 2016, the app has had over several downloads. Users can key in their votes based on their preference. The user could also invite friends and family to vote by sharing questions. In addition to this, users can type in their views/opinion on a particular social/societal issue. The App uses the further engagement method with the users and its not just a petition filing app. Through the “Ask India “ Section  in the app. The app wants to engage in constructive, rational, active discussion and break stereotypes to bring in change.

With a master’s degree in computer science from the University of Hyderabad and thereafter a MBA from IIM Lucknow, Akshat Jain has over 13 years of experience in leading product development, strategy and technology. He is the co-founder of Swipe & Finest Minds Infotech. As co-founder, he brings to the table organizational, people management and IT expertise as well as stellar leadership skills. 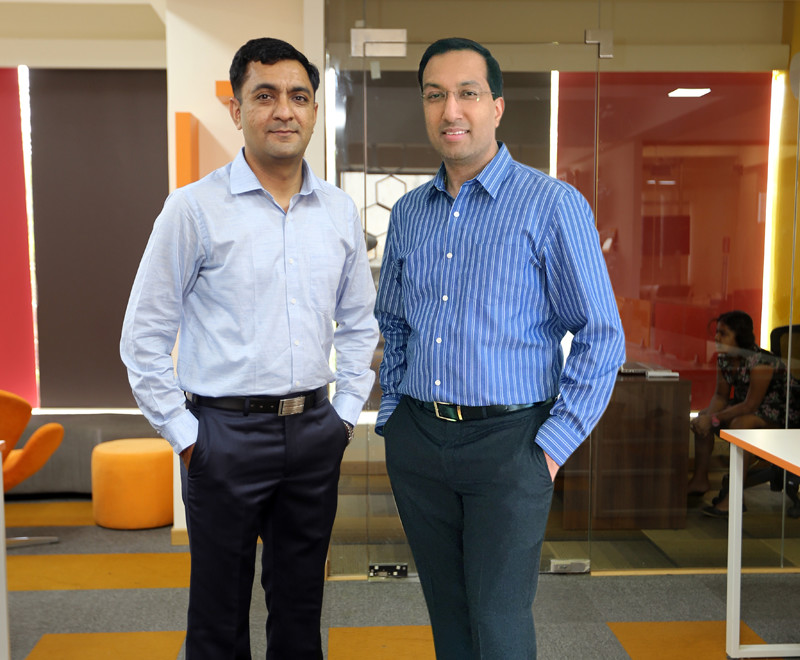 Anuj Goel has worked on some of the world’s most reputed brands in the last 16 years and headed several leadership roles in technology, management operations, strategy development and implementation. Prior to launching Swipe, Anuj co-founded Cyware, a cybersecurity awareness platform with a mission of enhancing security culture by strengthening situational awareness and building a common, shared knowledge of cyber threats. The simplicity of the platform has made it go viral and Cyware is being used by several cyber-security professionals globally.

Swipe is a team of 12 with a strong motivation “to empower everyone’s opinion that should be accounted for and to enable decisions based on people’s concerns over an issue”.

When it comes to the space of expressing opinions most of the social medias including giants like Facebook is a competitor, as people generally tend to express about public opinions and about themselves. But, in reality, most of us do not express what we really feel in these social medias, because of the presence of friends and families in them. Also most of the opinions that we share are driven by gaining maximum likes and comments. Swipe addresses these two key issues.

In swipe, a user can go anonymous to express his/her opinion and since all the comments expressed are present in a single thread, the concerned stake holder can grab hold of the data, analyse, draw conclusion and take necessary action from then on. 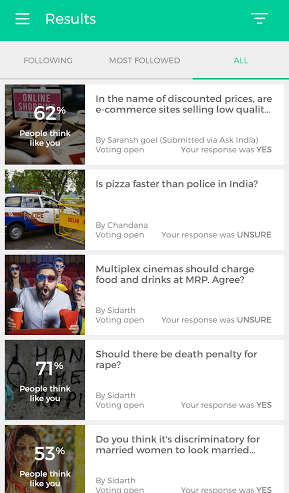 Swipe defines social issues as “the general problems that affect and influence a large number of individuals within a society. They often include problems that affect real, day-to-day life. It also affects how people react to certain traditions, beliefs, and ideologies” and it has been asking some pretty serious questions to its consumers and the opinions expressed in the platform has been giving a whole new perspective to what has been traditionally believed by most. Some of the interesting questions that were raised on swipe include,

The final question found 78% of the voters agreeing to it and 22% disagreeing, the most interesting part of the poll is that the 22% of the voters, who happened to be the industrialists themselves had genuine reasons to disagree and that’s why platforms like Swipe enable to provide a better chance at expressing your right to freedom of speech.

The platform had a pilot launch in Delhi and since then they had to experience their own set of challenges in terms of adoption.

“The current market has made the customers to expect cash-backs even to express views, and referral benefits to share the platform with their friends.” says Akshat.

“Are the consumers mind corrupted with discounts offered by burning VC money?” I am still eagerly awaiting the opinions expressed if such a question is raised in Swipe.

Within 2 months of its launch, Swipe had seen over 1 lakh votes made on various social issues. As a part of its phase 1 project, Swipe aims to cover every Indian residing in India and NRI’s. Every Indian includes the rural areas where even basic internet facilities like 2G is sometimes not available. They have taken up this issue on priority and are looking to solve this by themselves.

As a part of phase 2 they want to take Swipe to every democratic country where people could express their views and the government can take decisions to keep the true spirit of democracy alive.