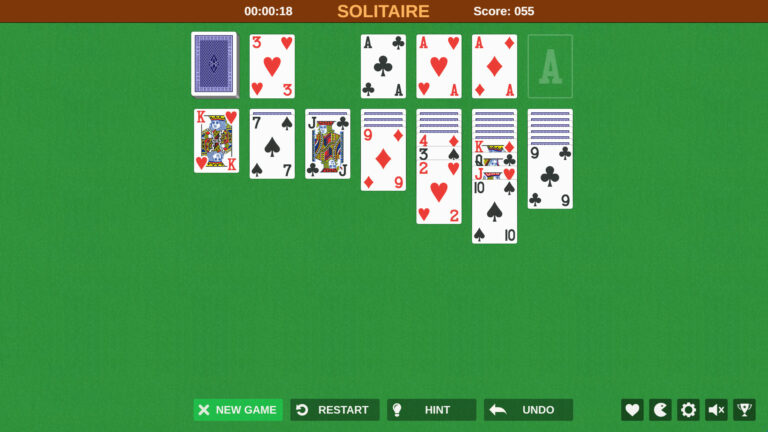 When people need a time out from daily stresses or merely a way to challenge their minds, a solo card game can quickly help them relax and participate in strategic gameplay. Play-Solitaire.com provides an easy-to-use online interface for playing a free version of Classic Klondike Solitaire. 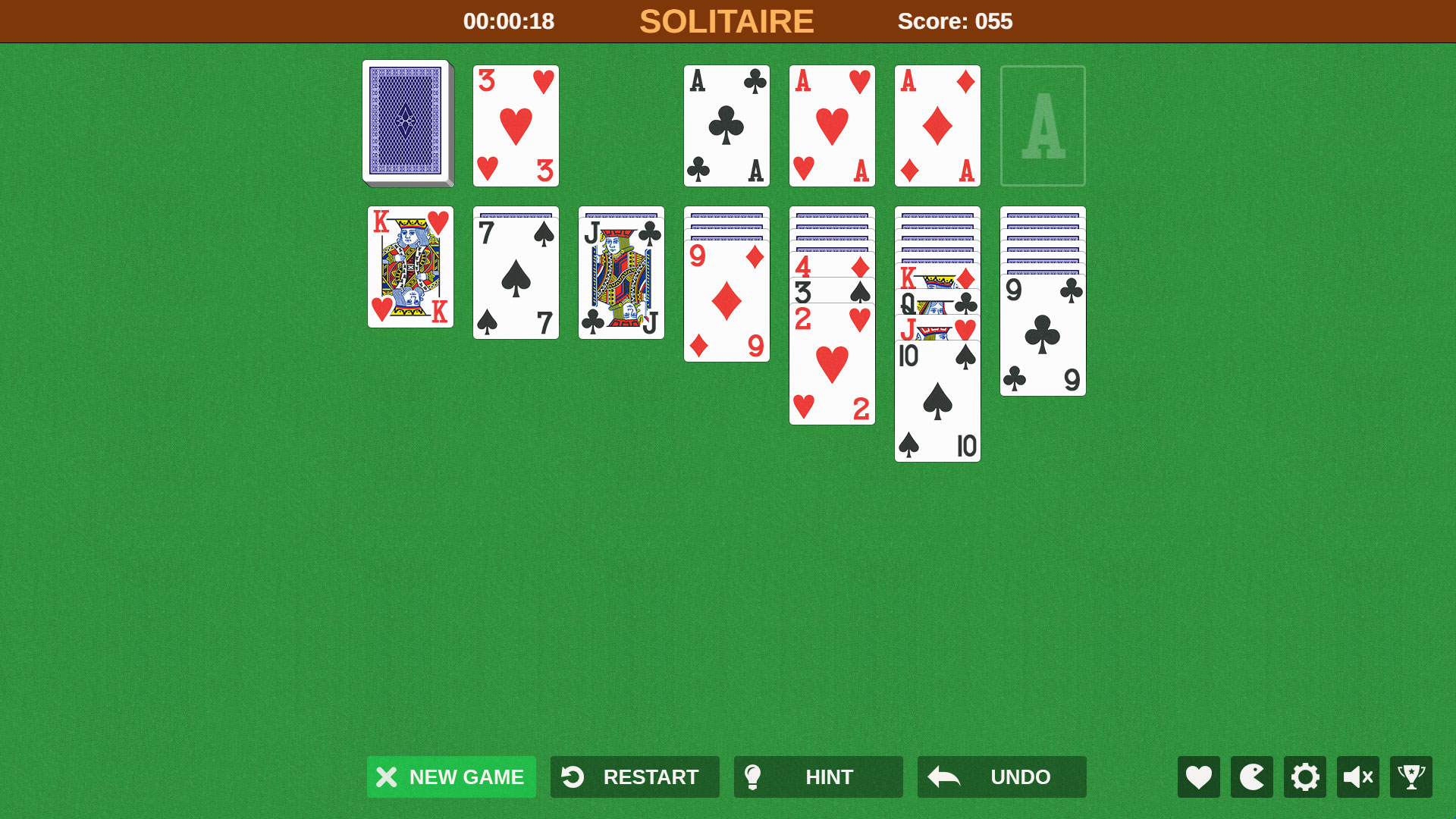 Before computers, people played solo, puzzle-style card games like Solitaire on regular and green-felt game tables. In the 1990s, Microsoft made Solitaire extremely popular with early computer adopters by offering it for free on its Windows OS computers. The first computer-based Solitaire replicated Klondike on a green-felt background. Eventually, other popular versions like FreeCell, Mahjong Solitaire and Spider Solitaire and online versions of Solitaire and other games became available.

For new Solitaire card players, Klondike remains the best starting version. It teaches a player everything they need to know about sequential ordering of cards in a standard 52-card playing deck, which is the most common card deck used for a variety of games. Moreover, it is easily accessible online on sites like Play-Solitaire.com & solitairebliss. Players also develop patience and strategy skills while trying to rearrange the cards. For this reason, many people historically referred to Solitaire as “Patience.”

The site’s main screen is designed to look like a green-felt card table. On a Solitaire title bar above the card area, the game automatically provides a timer and a score counter. A player receives access to several support and customization tools. For example, the bottom center of the screen features a “New Game” button to start a new game with a different arrangement of cards, a “Restart” button to start the same game over and an “Undo” button to reverse a single move. Unlike many other game sites, Play-Solitaire.com highlights sequentially matching cards with pink highlighting when the player clicks a “Hints” button.

The bottom right corner of the screen features small buttons with white icons to perform different tasks. For example, with the white Gear button, they can adjust settings, such as remove the timer, score counter or “Hints” button, choose a different deck or change the table background color and material. By clicking the Trophy button, they can check important statistics, including the number of games they played, won and lost and their win percentage, current and longest winning streaks, longest losing streak, top and average scores and best and average times.

Play-Solitaire.com automatically deals out 28 cards into seven vertical columns of non-sequential piles on the table in face-up and face-down positions. The columns area is known as the tableau. Typically, the first column starts with one card, the second with two cards and so on.

The player must find ways to sequentially reorder the cards into piles by color and suit (i.e. clubs, diamonds, hearts and spades) starting with the Ace and ending with the King (i.e. A, 2, 3… J, Q, and K) in four empty slots known as the build area above the tableau. The game presents the rest of the cards in a deck-style pile in a face-down position in another area above the tableau called the draw pile.

To progress through the game, the player must search for Aces to start filling the build slots and complete the suits. Since the game might hide Aces anywhere, the player must tap, drag and drop or double click cards of opposing colors of any suit to rearrange them in sequence from King down (K, Q, J… and 3, 2 and A) on the vertical column piles to reveal new cards. For example, a player might place a black eight of spades from one column below a red nine of hearts in another column.

They can also choose to draw one or three cards from the draw pile, as chosen at the start of the game, to find new sequential cards to fill gaps on the columns. For example, they might reveal a black six on a column and need a red seven from the draw pile to help them move the six card to the column that has the black eight and red nine cards from the previous example. They then repeatedly tap the draw pile to reveal cards until they find the one they need or an Ace to start a build pile. Each time they find an Ace or the next card in the A-to-K sequence, they can transfer it to a build slot. The player wins the game after they’ve completed all four suits in the build area. 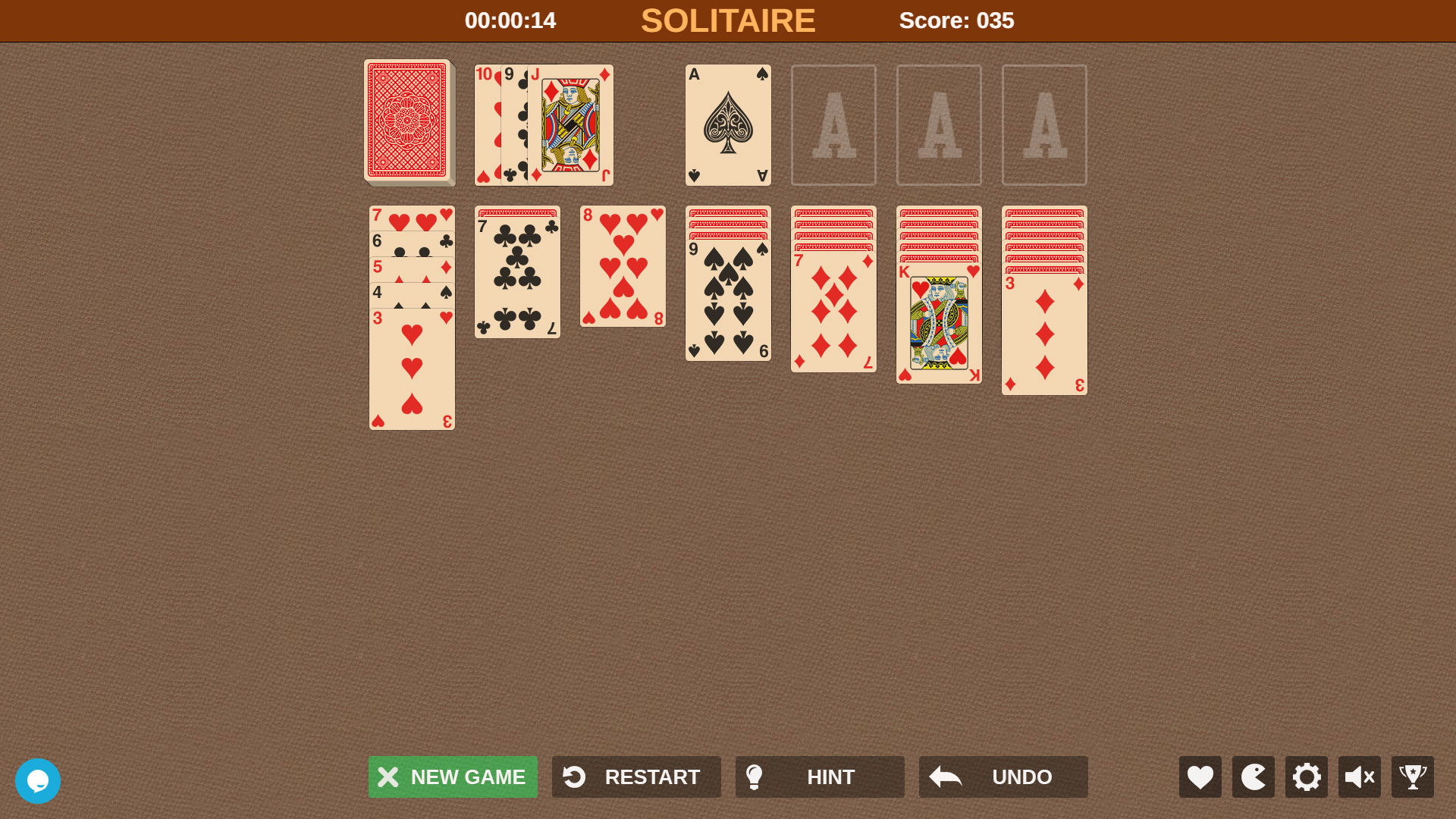 Play-Solitaire.com opens Klondike Solitaire full screen within the browser. A player can start playing immediately because the site never requires a download. Since the game is browser-oriented, they also don’t need a specific device, operating system or browser to access the game. They can play it on a desktop computer, laptop, smartphone or tablet!

Play-Solitaire.com’s Klondike Solitaire is also entirely free. It requires no download, freemium or subscription fees. A player never has to worry about a credit card or bank account charge. They can enjoy as much or as little time as they like playing a much-beloved solo puzzle game in a convenient digital format from anywhere!