Trump’s blog comes to an end 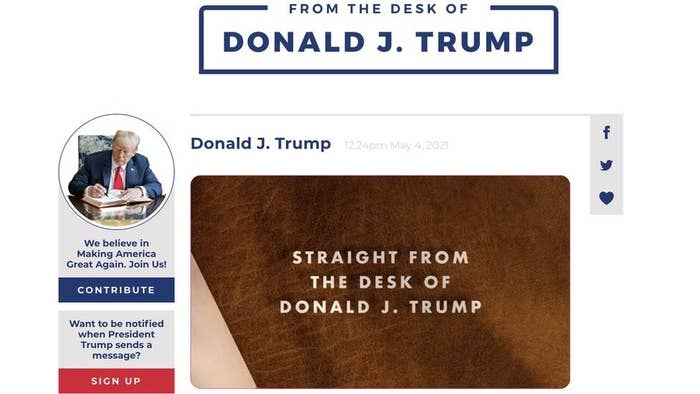 Donald Trump’s senior aide Jason Miller tweeted and confirmed that the site will not return. You might be thinking what could possibly motivate a former president of the USA to open a blog. After the 6th January 2021 riots Trump’s social media accounts were temporarily banned from Facebook and YouTube and permanently deleted from Twitter. Facebook’s Oversight Sight Board ruling allowed the ban but swiftly put Facebook on the spot by telling Facebook to make the final decision.

Trump’s words were believed to be the main reason for inciting the riots which took place in early January this year. To put it briefly, the voter base in America was mainly divided in two groups; supporters of Trump and the supporters of Biden. After it was stipulated that Biden was going to win the Presidential elections, Trump supporters stormed the Capitol to stop the official final counting of the votes before appointing Joe Biden as the President. The mind or rather the words behind this were considered to be Trump’s and that was the reason for the social media boycott.

Trump’s blog was a response to this mass boycott of him by all major social media platforms. After the 6th January 2021 riots Trump’s team said that he would return to the social media platforms soon enough. Now, the website directs its visitors to a page encouraging them to sign up for alerts from Trump and his team. After the ban many attempts were made by “Trump enthusiasts” to keep his word up on social media but all those accounts were either banned or deleted including a YouTube video uploaded by Donald Trump’s daughter, Ivanka Trump.

Trump’s team has mentioned that they will return with a new “social communication platform”. I have no clue what that means but if there is a certain application named “Dwitter” or “Dreaddit” on the way, then the online space is going to become even more toxic that it was when Donald Trump was on a platform controlled by someone else. If an application solely made for Trump supporters is launched and it actually takes off, gains popularity and maintains the traction required with the public then this will be a new low point for modern humanity.