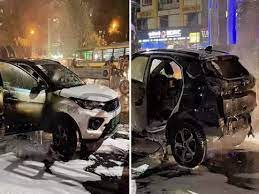 Twitter Erupts as Tata Nexon EV Catches Fire The Nexon EV uses LFP cells, which are more forgiving under thermal stress than NMC cells, although the exact cause of the fire is still unknown.

Over the past year, electric scooters and bikes have stolen the show in the electric vehicle’s world as many cases of them catching fire spread around news companies and social media platforms. These fires have caused the entire country to be divisive about purchasing electric scooters.

People assumed that electric cars however, are much safer and a much better option, but in a first, an electric car has caught fire! A Tata Nexon EV version caught fire on June the 22nd. It caught a blaze in Vasai West area of Mumbai. Journalist, Kamal Joshi spread the news, taking a video of the local fire department dousing the fire with water. He even tagged Tata’s Twitter page on his post. 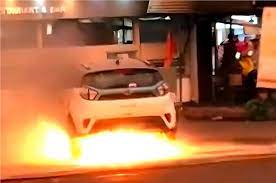 The tweet has been up for less than a day and has racked up over 300 likes and over 112 retweets.

According to Mr. Joshi, the reason as to why the fire occurred has not been figured out yet and Tata’s employees are currently investigating the matter.

The chief executive officer of Ola, Mr. Bhavish Aggarwal took to his Twitter account to give his comments on the situation. He said that electric vehicles catching fire will take place and went on to say that these accidents take place around the world and its not just an Indian issue. He also said that Electric vehicles catch fires at a much lesser rate than normal combustible engine vehicles.

He even tagged Hormazd Sorabjee, one of India’s most respected automobile journalists and the editor of Autocar India. He replied to Mr. Aggarwal’s tweet saying that taking care of Lithium based battery can be a difficult issue due their combustion risks. He went on to say that it is the main reason airport staff and security instruct the passengers to put their power banks and portable chargers in their hand carry instead of checking it in with the luggage. He said that instead of arguing over which type of vehicle is better, we should all come together and work on reducing these types of issues on all kinds of vehicles.

Mr. Aggarwal replied to that tweet saying that he completely agrees with Mr. Sorabjee’s comments. He went on to say that a lot of knowledge and awareness has to be inculcated to the people about electric vehicles, especially because it is an industry that is always growing and will take over the automobile industry. He ended his tweet asking people to come together so we all have more knowledge about electric vehicles.