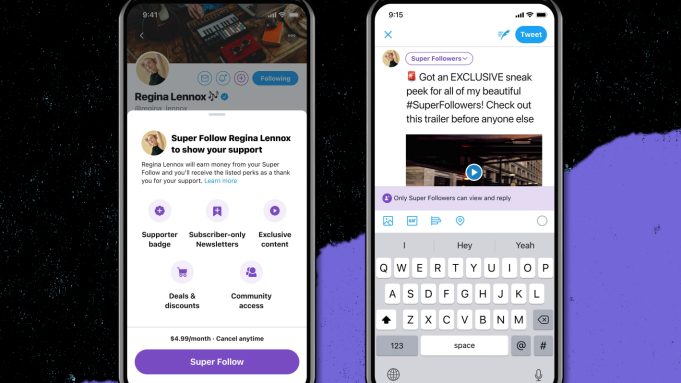 Twitter is finally bringing a new feature to the platform, months after shutting down its ‘Fleets’. The new feature is called “Super Follows”, it is subscription-based, allowing content creators on the platform to charge their followers for exclusive content.

Yes, this feature is Twitter’s take on a subscription-based model where it is allowing its creators to charge from their subscribers directly for exclusive and personalized content. The social networking platform has made this feature available to a select few creators with plans for expansion in the coming weeks.

Twitter users will have to pay a monthly subscription of USD 2.99, USD 4.99, or USD 9.99, as mentioned in a report by Engadget, in order to have exclusive access to subscriber-only tweets. This is a basic subscription model introduced by Twitter and eventually, based on the success of this one, the social networking platform will integrate new features with subscriptions, including Newsletters and Spaces. However, the feature is still in the testing phase which explains why the company has only offered it to a group of small creators.

It is true that by paying a few bucks will give you access to exclusive content from your favorite creators but another perk of this feature will allow users to interact with the creator in a slightly more private way than Twitter allows. For instance, if you follow a specific tarot card reader on Twitter, you can subscribe to him/her and get personalized advice and tips from them by paying a monthly subscription fee.

Super Follows is a brand-new feature that fundamentally varies from what Twitter has been offering for so many years now. This is one of Twitter’s many plans to revolutionize how users use the platform to interact with each other.

Other than this, Twitter is working on several projects that contribute to the company’s plans in revolutionizing Twitter. The company acquired a newsletter platform-Revue at the beginning of the year and introduced Spaces on the platform which is likely to get an audio chat feature.

As mentioned in a report by Engadget, Twitter’s selected few creators with the new Super Follow feature include:

Anyhow, do you think that Twitter users will pay for a subscription, just to get a couple of exclusive Tweets from creators on the platform? I personally don’t think that this feature will be a hit but you never know.