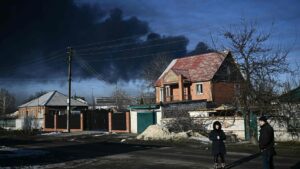 The Ukrainian government have called on volunteers from the nation’s underground of hackers. They asked for these hackers who can aid towards protecting critical infrastructure. Along with it, carry out cyber spring missions against the Russian Troops. The source of this news are two people that are involved in this project.

Among recent happenings, The Russian military forces initiated attack across cities in Ukraine. As these took place, volunteer requests began to come up on hackers forums on Thursday, February 24. They started popping up from the morning itself just as city residents starting fleeing from the capital city of Kyiv.

The post came up on hacker forums which asked for hackers and experts in cybersecurity to give in an application through the medium of ‘Google docs.’ They would be required to list their specialities and give in their professional references through the medium.

According to a report, the co-founder of a cybersecurity company in the city of Kyiv, Yegor Aushev had written the post. It was done at the request from a senior official of the Defense Ministry, who had contacted Aushev. His company, ‘Cyber Unit Technologies’ is famous for being close ties with the Ukrainian Government on the backing of critical infrastructure.

“Ukrainian cybercommunity! It’s time to get involved in the cyber defense of our country,” the post read.

The representatives of the Ukraine Defense Ministry did not respond when approached for a comment on the news. A defence attache at Washington’s Ukraine embassy commented that he was unable to confirm or deny the news coming from the channels of the messaging platform, Telegram.

Yegor Aushev clarified that the volunteers would be placed in distinct cyber unit groups of defensive and offensive. The former unit would be assigned to defend the infrastructure of the state i.e., water systems, power plants, etc. This focus is owing to the 2015 cyber-attack attributed to the state hackers from Russia. This was when about 225,000 Ukrainians had lost electricity. The latter unit that Aushev is forming, would aid in helping Ukraine’s military conduct digital espionage operations against the incoming Russian forces.

On Wednesday February 23, a new aspect of a destructive software was discovered going around Ukraine. The researchers from ESET, a cybersecurity firm specified that it was hitting numerous computers. Russia was suspected as they had been earlier accused of hacking against many countries, including Ukraine. Though Russia had denied these claims, many government agencies were affected because of it.

A security official pointed out that Ukraine does not have a distinguished military cyber force yet and it is time for them to build one. Aushev admitted that these efforts towards creating a cyber military force is coming rather late. Fortunately, he had already received numerous applications from the required volunteers.