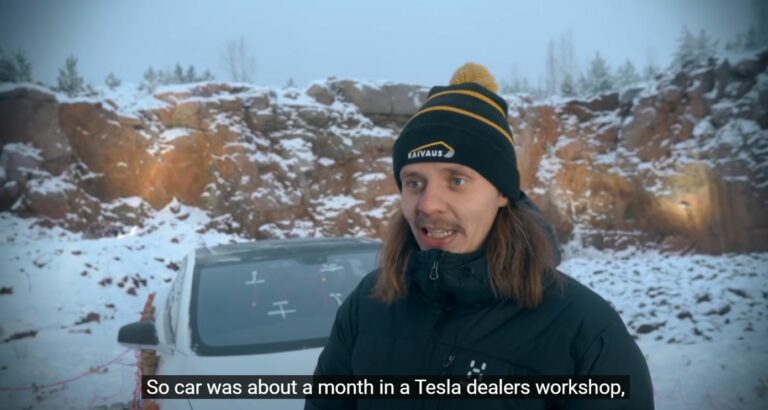 A Tesla owner who has been using a 2013 Tesla Model S is required to replace the battery for his 8-year-old EV. When he went to the service center only to find out later that the vehicle needs battery replacement costing around €20,000 ($22,480). Once the electric vehicle is not under warranty the cost of maintaining the vehicle becomes very high and this is one of the best examples to show it. However, the Tesla owner notes in mind that he can’t use the vehicle anymore and decides to blow up the vehicle.

It is also to be noted that the vehicle had multiple error codes and the vehicle needed a tow truck to be sent to a service center. It is not just battery replacement, but the vehicle would have needed a makeover in many aspects as well. Despite having a pleasant experience with the vehicle for years, the situation after the warranty period turns out to be different.

The unhappy owner decided to blow up his Tesla car with a 30kg dynamite and also put a Tesla CEO Elon Musk doll inside the vehicle. After the blowup, there were barely some parts left of the vehicle. The owner seemed to be happy after the blowup.  Considering the situation to pay a hefty price compared to the cost when the vehicle was bought, it was understandable. Also, bring attention to the fact that owners might have to pay the same amount later in the future as the battery needs replacement.

Tuomas Katainen is the unhappy owner who blew up the vehicle. He said he bought the vehicle second-hand and drove only for 1,500 km so far. After which errors began popping up and the car stopped functioning. Considering that Tesla vehicles can’t be serviced at other service locations, Katainen had to go to the original center. This is possibly why it led to the owner taking such a step to go and blow up the vehicle.

After the blast, Katainen said he might be the first person to ever blow up a Tesla vehicle. Though he might not have got the full deal by buying a second-hand vehicle, he definitely got it through many viewers for his video. It was quite a performance where there was a whole team to assist and it looked like everyone there enjoyed it including the viewers who got entertained. It is not about whether it was just or not because there are various videos of Tesla vehicles being examined, viewed, compared, and whatnot. This is one of such interesting videos to see how it would look like burning a Tesla vehicle with dynamite.