United States has no plans to ban Bitcoin: Jerome Powell

During a hearing on the Treasury Department’s and Federal Reserve’s Pandemic Response on Thursday afternoon, Federal Reserve Chairman Jerome Powell confirmed that the United States has no plans to ban Bitcoin and cryptocurrencies. 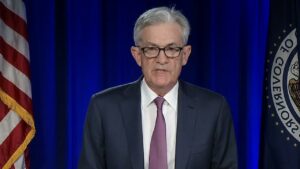 Chairman Powell was questioned about the state of inflation in the United States by House Representative Ted Budd (R-North Carolina) during the hearing. Powell was successful in skipping the questions about inflation. Arguing that the country’s inflation is driven by the government’s pandemic response’s supply chain difficulties.

Inflation would fall in the “early part of next year”

When it comes to inflation, the chairman effectively stated that the Fed’s hands are restricted and that relief will come. Powell predicted that inflation would fall in the “early part of next year”.

“So, Mr Chairman, is it your aim to ban or regulate the usage of cryptocurrencies, as we see in China?” Budd continued.

Jerome Powell replied, “No,” before going on to describe how he had made a mistake at the time.

“But you have no intention of banning them?” Budd asked again.

Powell said, “No desire to ban them”. And went on to explain why stable currencies should be a part of the regulatory framework.

For many Bitcoiners, such congressional debates are exasperating to listen to. Because the Fed’s comprehension of the differences between Bitcoin other cryptocurrencies is woefully inadequate.

However, given the Fed’s and members of Congress’ constant association of Bitcoin with other cryptocurrencies, we may reasonably conclude Chairman Powell was speaking about Bitcoin as well.

From a regulatory standpoint, Bitcoiners and politicians still have a lot of work to do to appropriately represent and explain where their interests intersect so that they can make an informed decision about whether and to what degree to regulate Bitcoin.

In any case, the United States’ regulation of Bitcoin is still an embracing of the technology. And it is diametrically opposing to China’s policy from a geopolitical standpoint. America benefits from China’s loss.