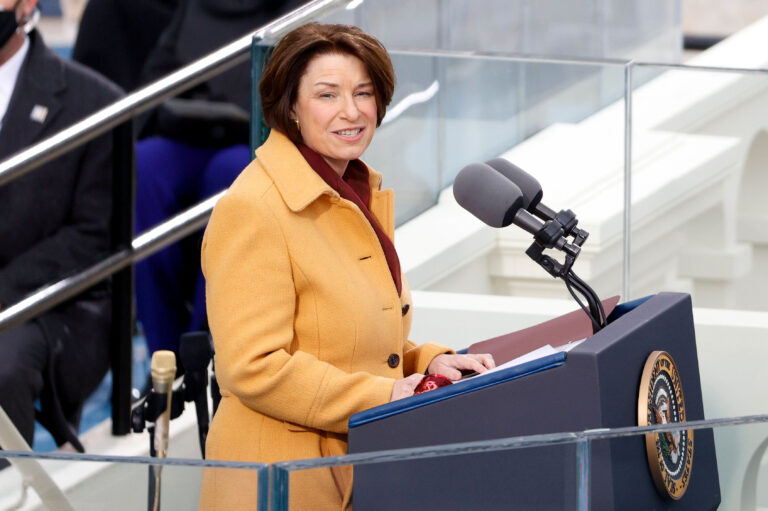 FILE PHOTO: Sen. Amy Klobuchar (D-MN) speaks during the inauguration of Joe Biden as the 46th President of the United States on the West Front of the U.S. Capitol in Washington, U.S., January 20, 2021. REUTERS/Brendan McDermid/File Photo
Home
News

Section 230 of the Communications Decency Act protects Facebook Google Twitter against being sued for user-generated misinformation. Two senators,
Amy Klobuchar (D-MN) and Ben Ray Lujan (D-NM), have proposed The Health Misinformation Act, which will strip Section 230 protections from social media companies if they continue to facilitate the spread of misinformation about the public health crisis like Covid-19. According to The Verge, the act directs the Health and Human Services Secretary to create and issue guidelines on what counts as misinformation about health.

Senator Amy Klobuchar says that the bill ‘will hold online platforms accountable for the spread of health-related misinformation.’

“Earlier this year, I called on Facebook and Twitter to remove accounts that are responsible for producing the majority of misinformation about the coronavirus, but we need a long-term solution,” she said in a statement. “This legislation will hold online platforms accountable for the spread of health-related misinformation.”

“We have long supported common industry standards and section 230 reform. We believe clarification on the difficult and urgent questions about health-related misinformation would be helpful and look forward to working with Congress and the industry as we consider options for reform.”

Just a few days ago president Biden accused Facebook of “killing people” with misinformation. Later he clarified that he did not mean Facebook as a company is killing people but the misinformation that is being circulated and exaggerated at such social media platforms.

The bell seems unlikely to pass at present because it contradicts first amendment protections. ‘Wilful misinformation’ and ‘lies’ are protected by the First Amendment against law creation like this and there are decades of legal precedent supporting that viewpoint. Although, Lawmakers are examining the boundaries of protection that must be provided by Section 230.