The journey of a thousand miles begins with a single step ! What started off as a blog handled by a single person, VCCircle today has become one of India’s largest digital platforms in the field of online business news, data, events and trainings. VCCircle Network today includes includes VCCircle, Techcircle, VCCEdge, VCCircle Training, in addition to a premium-content driven conference business. In this talk with Techstory Sahad PV, the founder of VCCircle, talks about the VCCircle journey, about how he built a sustainable and high growth business, the recent acquisition by News Corp and his lessons from his entrepreneurial journey. 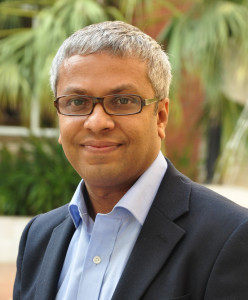 In 2005, blogging was just about kicking off and blogs such as TechCrunch were just starting off. In 2005, Sahad was thinking of building a community around certain content and eventually building a business around that. At the same time, the startup activity in India was picking up and funding news was beginning to appear on the Indian startup horizon. This was a new trend setting in at the time, something that India had not witnessed before on a large scale.

Creating information that will be useful for the venture capitalists and creating a knowledge base and a community for the VC’s seemed like a perfect idea to enter the blogging and content creation market to Sahad at that time. Thus began the journey of VCCircle !

For the first 2 years after VCCircle started, Sahad was the only person writing for the blog. Although it started as a blog, Sahad was always keen on converting it into a full fledged business and in the first 2 years was able to create a good readership among the VC and the entrepreneur community.

The first 2 to 3 years after starting the company I was the only person writing for VCCircle. The focus during this time was on trying to generate a good flow of traffic and to create insightful information.

Towards the end of 2007, VCCircle secured its angel round of funding.Creating articles that were causing impact in the community and thus creating a huge reader-base were the reasons why Sahad believes they secured their first round of investment.By the end of 2007, Sahad had started looking at VCCircle as a financial media company and was looking to build a lot of products around it.

The time from 2007 to 2010 was spent trying to figure out what works and what doesn’t. We tried a number of things to see what really made sense with the users. Till 2010, I would say we were still gaining momentum, the tipping point however came 2010 onwards.It was after this that the company grew exponentially.

Today the company has several products targeting several sectors and has been India’s only company which started out as a blog and emerged into a full fledged corporate business. The company today is a 100 people company is expected to grow to 150 people by the end of the year.

We have always tried to maintain a good edge about the data that we bring to our customer base. We also always hired experienced people to grow our business right from the start which has helped us in creating a successful enterprise.

Sahad believes that one of the reasons why VCCircle has been so successful is because the company was able to diversify into multiple products centered around the theme of funding information in the Indian startup space. Being able to create multiple revenue streams has helped the company reach the place it is today. VCCircle today is a portfolio of following businesses.

VCCirlce is a media platform that talks about private equity, venture capital, and M&A related information and analysis of the Indian investment ecosystem. It tracks M&A, venture capital, private equity, investment banking, and emerging companies and sectors and offers a subscription based model for access to its high end research reports in the sector. An online subscription based information model is not exactly very popular in India. The fact that VCCircle has been able sustain such a model speaks volumes about the quality of information they bring to their readers.

Understanding the pulse of the industry in 2009, Sahad started VCCEdge, a product that would make financial data about companies available to VCs, entrepreneurs and bankers.Today VCCEdge is one of the largest database of private company information available in India.

Technology space in India was booming and a number of technology startups were coming up in India in 2011. Sahad started Techcircle in 2011 with an aim to track India’s booming technology startups, including the people behind the companies, innovations, products, strategies and startup financing.

The focus on continuing education was growing among the corporate class and venture investment and related topics were getting a lot of attention in 2011. Sahad quickly understood that this was a huge opportunity for him to venture into the education space and therefore started an executive education division that conducts intensive workshops and seminars on finance, legal and regulatory topics for corporate, financial and legal professionals.Sahad hints that the company might venture into more domains in the executive education space.

Events and Conference go very well with media companies. Understanding this, Sahad held the first VCCirlce Event in Bangalore. Today the company has 18 to 20 city specific events across verticals in India. Events cater to all people from technology and non technology sectors which make them special.

In March 2015, VCCircle was acquired by the American multinational News Corp. Raju Narisetti,Senior Vice-President, Strategy, for News Corporation spoke to Techstory about this acquisition.

India is one of the very attractive markets right now that no one can ignore. We were wanting to create a presence in India in the information space. We are always looking to partner with organizations that have a long term vision. With their vision, their data driven approach and their focus on having multiple revenues streams, VCCircle seemed like a perfect company that we would like to acquire.

The two companies see a lot of synergies in working together. Post the acquisition, the VCCEdge platform which covers financial data of companies will be launched on an international level.

After building one of India’s best known content platforms and possibly India’s only blog that has developed into a full fledged business, Sahad has a few insights he would like to share with other entrepreneurs.

Sahad believes that to be successful in the entrepreneurial space, patience is one of the main virtues one has to have. The initial two years, when Sahad was running the blog alone, were the toughest for him. He stuck around and finally a tipping point came when his business started growing exponentially ! One of the strongest reasons why Sahad believes VCCircle has achieved the massive success that it has is because they could focus on multiple sources of revenues and not just a single source to depend on. As an entrepreneur, Sahad also believes that one has to be flexible as dynamics of business keep changing all the time ! The focus should be on reaching somewhere and creating value for the customers !