VIA ALL SET TO REMIX

Via; the giant transportation technology company has decided to diversify its operations through investing in a similar segment start up Remix recently by inducing a huge amount of $ 100 million. Remix since its inception has tried to maintain the efficiency in the mobility issues across the transportation planning and mapping industry to a large extent.

This step of close horizontal integration taken by Via would bring immense benefit to both the companies in expanding their businesses to a large span across the globe trying to tap the untapped market. 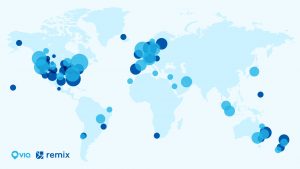 Via was started back in 2012 with a vision to offer more stability and mobility to the rigid transportation network mechanism. The use of algorithms made this objective more achievable and in turn added dynamicity to the functioning of cities, operators, districts, corporations and universities at large. Since then; the company is evolving and diversifying. A major amount was raised by company through EXOR Series E round last year helping it to touch $ 2.25 billion valuation.

The global outreach of Via is justified by more than 70 million rides and association with over 90 plus transit partners. More than 20 countries have experienced the solutions by contributing close to saving of 32 million pounds of carbon dioxide.

Two years later; Remix was set up from a great response to simple projects for San Francisco people and has now been able to provide easy transporting and transit solutions to people across the world to more than 350 cities over 5 continents.

This acquisition will bring in the categorical benefits to the synergy mode as both the companies are aiming on the same targets of helping  the general public to cope with problems of transportation in the long run.

Via Co-founders Daniel Ramot and Oren Shoval said “We have always held the Remix product in the highest regard, and are delighted to be working with Tiffany, Dan, and their exceptional team”. Remix CEO & Co- founder Tiffany Chu also mentioned that this acquisition would embark a new era for our customers, partners and team.

The advantageous position will be enjoyed by both the providers but in different domains as mentioned below:

The setting up of these companies was a breakthrough; but their coming together is surely be a major turning point in the transportation space as it will lead to a generous remix of all the solutions via technology and mapping.